ARS Technica reports Intel is planning to catch up with AMD by adding full memory encryption support on its future processors. Intel's Anil Rao and Scott Woodgate talked about the subject at Intel's Security Day event on Tuesday. The site says what Intel is planning to implement sounds similar to the SME (Secure Memory Encryption) and SEV (Secure Encrypted Virtualization) features that are found on AMD's current EPYC server processors. At least in the case of AMD's processors, these technologies have a negligible performance impact.

For the moment, Software Guard Extensions are the only Intel offering available. But after discussing real-world use of SGX, Rao moved on to future Intel technologies—specifically, full-memory encryption. Intel refers to its version of full-memory encryption as TME (Total Memory Encryption) or MKTME (Multi-Key Total Memory Encryption). Unfortunately, those features are vaporware for the moment. Although Intel submitted an enormous Linux kernel patchset last May for enabling those features, there are still no real-world processors that offer them. 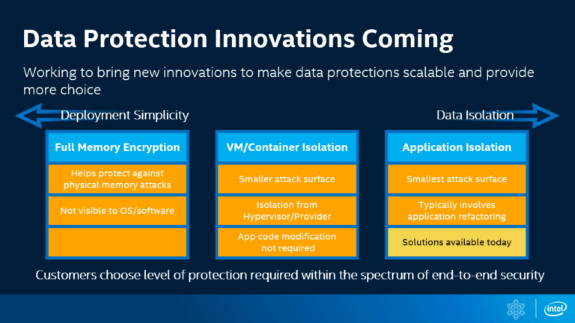