First photo of AMD B550 based motherboard emerges

Posted on Tuesday, March 10 2020 @ 12:51 CET by Thomas De Maesschalck
VideoCardz received the first photo of an AMD B550 based motherboard. The product pictured below is made by SOYO, the Chinese firm behind Maxsun. It's a really low-budget option that you're unlikely to see outside of Asia.

Anyway, the interesting thing here is that VideoCardz is able to confirm that the B550 indeed has PCI Express 4.0 support, a feature that isn't present on the B550A. The latter was rolled out some time ago for OEMs.

We received a picture of the first B550 non-A motherboard from a source at SOYO (a company behind Chinese Maxsun). This motherboard is a very lost-cost option. It’s a Micro-ATX motherboard with a brown PCB, red PCIe slots and blue VGA connector, but a true icing on the cake is a dragon graphic.

The launch of these boards is expected sometime in the first half of 2020. 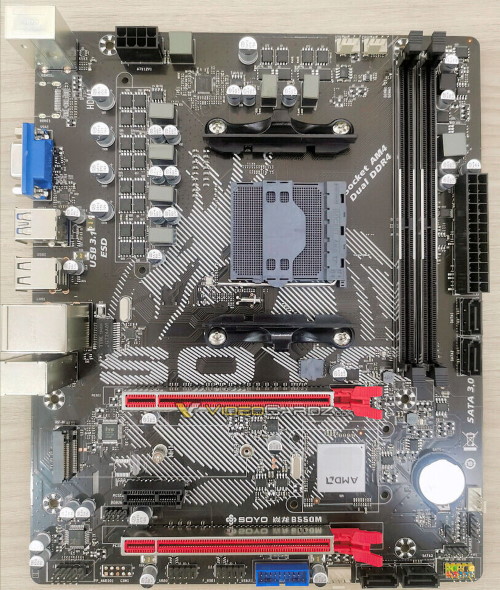