Posted on Tuesday, March 31 2020 @ 11:20 CEST by Thomas De Maesschalck
TrendForce has updated its predictions about the NAND flash memory market. The agency expects consumer SSDs will see a 5-10 percent price increase next quarter, while enterprise SSDs are expected to go up as much as 10-15 percent. However, TrendForce believes that due to the coronavirus pandemic, prices will drop earlier than previously expected. The press release notes we can now expect a change of trend in the second half of this year.

According to the latest investigations by the DRAMeXchange research division of TrendForce, the continued spread of the COVID-19 pandemic has resulted in considerably weakened shipment for most end products in 1Q20. However, the major NAND Flash suppliers already scaled back their CAPEX for this year, and the total bit output of the NAND Flash industry is expected to grow by only about 30% YoY in 2020, resulting in a 5% QoQ increase in NAND Flash ASP for the 1Q20 period despite the headwinds of the off-season.

Looking ahead to 2Q20, the supply crunch situation is the most severe for enterprise SSDs, among the various kinds of NAND Flash products, owing to the continued aggressive purchasing efforts from cloud service providers in North America and China. Given enterprise SSDs’ rapidly growing share of the overall bit consumption in the NAND Flash market, their soaring prices will help push up the overall NAND Flash ASP by at least 5% QoQ in 2Q20.

Based on TrendForce’s observations, OEMs of various end products have clearly demonstrated that they want to build up a safe level of inventory as early as possible. Their sense of urgency is further fueled by the fear of the coronavirus outbreak interfering with the operation of the major NAND Flash manufacturing sites in South Korea and China, leading to their increasing NAND Flash purchases in 2Q20. Given this circumstance, vigorous price negotiations that are taking place in the contract market for NAND Flash products are an indication that OEMs have double-booked some orders.

In spot and channel markets, prices are starting to drop for some branded SSD products due to waning demand. However, contract prices of wafer products are still on the rise due to undersupply. Currently, the stock-up drive in the enterprise SSD market is expected to prop up the overall NAND Flash demand during 2Q20. Hence, price increases will be relatively smaller for other kinds of NAND Flash products. The market dynamics could shift dramatically in 2H20 because the outbreak, which is now a pandemic, has expanded faster than anyone could imagine. While NAND Flash contract prices are expected to continue their rise during the first half of this year, there is now the possibility that their trajectory will curve downward in 2H20, or even 3Q20 at the earliest.

Contract prices of client SSD will likely keep climbing due to tight supply, while orders for eMMC/UFS have yet to see a decline
Supply is tight for client SSDs because most NAND Flash suppliers have adjusted their product mixes to increase production for enterprise SSDs, which offer higher margins. In terms of demand, notebook computer shipment has fallen sharply in 1Q20 owing to the pandemic’s influence, but PC OEMs have kept up their procurement of client SSDs during the quarter because they anticipate future price hikes. They could even raise their demand for 2Q20 in order to maintain a safe inventory level for the rest of the year. Therefore, there is a high possibility for client SSD prices to continue rising in 2Q20, with an expected 5% increase at the very least.

In the eMMC/UFS market, despite the pandemic’s impact on the supply side for smartphones and various consumer products, server/datacenter demand for SSDs has seen no decline. Furthermore, suppliers are holding healthy inventory levels, and are able to convert the wafers originally for the smartphone market to SSD production. There are therefore no notable signs of oversupply as of yet.

For smartphone brands, low NAND flash inventory levels, as well as the anticipation of later price hikes and of the effects the epidemic may have on shipments stopped them from changing procurement plans. However, the rapid, global spread of the pandemic already has suppliers and brands evaluating the possibility of demand decline for the second half of this year. This might impact procurement in 2H20. On the other hand, although orders for consumer products related to mid and small density eMMCs, such as TVs and set-top boxes, are still in place now, their suppliers may be pressured to correct inventory levels in 2H20. eMMC prices are still expected to increase by more than 5% QoQ in 2Q20, although this growth may not survive past 3Q20.

Despite short-term momentum, wafer prices may enter earlier-than-expected downturn by the end of 2Q20
In the NAND flash wafer market, the main reason for the price hike in 4Q19 has been the strong demand from servers/data centers, followed by the new demand coming from gaming consoles using SSDs. The strong demand for these products has led to a further decrease in the suppliers’ willingness to supply the wafer market. Seeing that the demand from datacenters has yet to fall and the new gaming console’s release date has maintained the same schedule at the current stage, TrendForce forecasts that the wafer market will still be riding on short-term momentum in March and April. But since demand for servers, data centers, and gaming consoles is feared to be impacted by the epidemic in 2H20, it is possible that pricing in the wafer market will begin to see a downturn at the end of 2Q20. 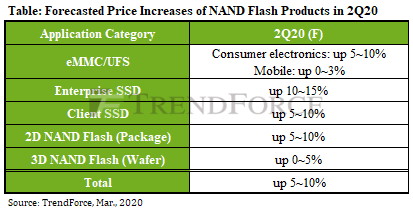