A highly detailed look at the surface of the Bennu asteroid

Posted on Wednesday, Apr 08 2020 @ 14:44 CEST by Thomas De Maesschalck
Ever wondered how the surface of an asteroid would look like? Newly released photos provide an unprecedented detailed look at the surface of Bennu. These photos were collected by NASA’s OSIRIS-REx spacecraft between Mar. 7 and Apr. 19, 2019. A total of 2,155 images were stitched together to provide a photo with a resolution of 5cm per pixel, giving us the highest resolution at which a planetary body has been globally mapped.

Engadget has more info over here:

We already know lots of other things about Bennu, including the fact that it’s spewing particles into space — behavior that’s common for a comet, but rare for an asteroid. Scientists also discovered that it’s surprisingly rugged, as is clear by the number of boulders strewn on its surface. They also found the presence of magnetite, indicating that it likely interacted with water on Bennu’s parent body. 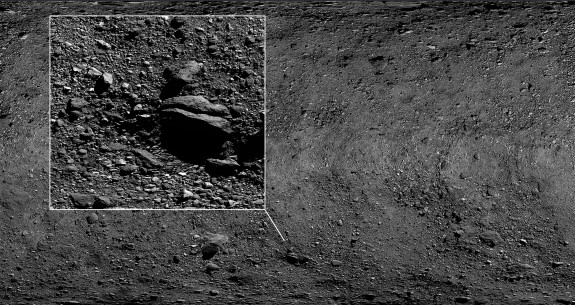