bequiet! Pure Base 500DX hits the market on April 28

Posted on Wednesday, Apr 15 2020 @ 14:15 CEST by Thomas De Maesschalck
bequiet! reveals the Pure Base 500DX, a new mid-tower that's shipping towards the end of this month for $99.9 (99.9EUR). Available in black and white versions, the Pure Base 500X offers enhanced airflow, a tempered glass side panel, and ARGB LED light effects.

The interior of Pure Base 500DX has the same smart design and features as the critically acclaimed Pure Base 500, including support for high-end graphics cards up to 369 millimeters, CPU coolers up to 190 millimeters, and ample storage mounting options. The case supports installation of up to five SSDs - two of which can be displayed prominently in the main chassis chamber - or four SSDs and two HDDs. A PSU shroud and smart cable routing options including Velcro straps and plenty of eyelets provide a neat interior, while removable dust filters in the front and bottom of the case keep dust outside. The tempered glass side panel provides a great view into the interior of the case.

Pure Base 500DX is the first case by be quiet! that is designed with high airflow as its main focus. The concept is supported by a high-airflow intake front panel and top cover. The case features a total of three Pure Wings 2 140 mm fans: for improved cooling performance, a fan under the top cover is added to the two fans that were already preinstalled in the original Pure Base 500. All three fans run at a maximum speed of 900 RPM for a silent operation. Users have the option of expanding the total amount of fans in the case to five (140 mm) or six (120 mm) for maximum cooling performance. Those opting for water cooling can fit radiators up to 240 mm in the top or up to 360 mm in the front of the case.

A heavy emphasis on airflow is not the only innovation for be quiet! with Pure Base 500DX: for the first time ever in the company's history, be quiet! has integrated addressable RGB in one of its products. The case features two strips with 14 individually addressable LEDs in the front panel and one strip with 10 LEDs in the top frame. This enables complex lighting configurations, either by controlling the LEDs via compatible mainboards or via a dedicated controller button on the front panel, which supports six different colors with four lighting presets and three rainbow color modes. Lighting can also be disabled completely. To future-proof the case, the front panel features a USB 3.1 Gen. 2 Type C connector with data rates of up to 10 Gigabits per second. 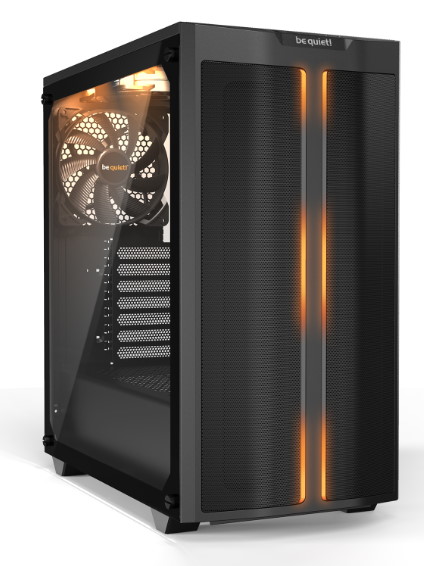