Some AI gains were illusory

Posted on Monday, Jun 01 2020 @ 11:05 CEST by Thomas De Maesschalck
Over the past couple of years, AI has become a big buzz word in the IT industry. But new work from a team of MIT researchers reveals a lot of the "AI advancement" booked over the past decade may have been illusory. David Blalock, a computer science graduate student at MIT, reports an investigation of 81 pruning algorithms revealed there was no clear evidence of performance improvement over a 10-year period.

While CPUs and GPUs have become a lot faster over the past decade, it appears the underlying algorithms and the complexity involved in these models didn't always result in clear gains. In fact, ExtremeTech points out that with some optimizations, older algorithms can keep up with or even manage to beat the supposedly much faster AI-based algorithms:

What the researchers found, specifically, is that in certain cases, older and simpler algorithms were capable of keeping up with newer approaches once the old methods were tweaked to improve their performance. In one case, a comparison of seven neural net-based media recommendation algorithms demonstrated that six of them were worse than older, simpler, non-neural algorithms. A Cornell comparison of image retrieval algorithms found that performance hasn’t budged since 2006 once the old methods were updated... 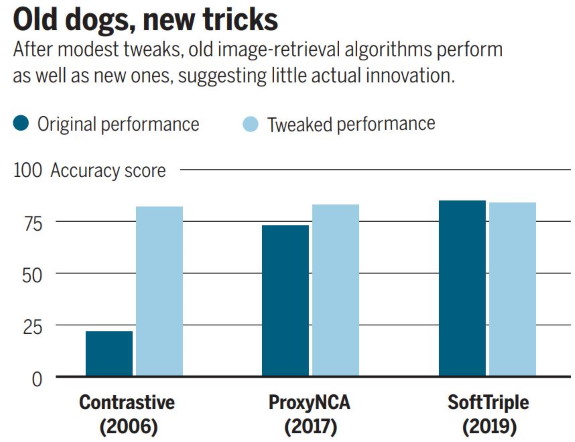