ThermalTake Floe RC offers watercooling for your CPU and RAM

Posted on Thursday, Jun 04 2020 @ 10:31 CEST by Thomas De Maesschalck
ThermalTake reveals world's first all-in-one watercooling solution that takes care of both your processor and your memory. The company will offer its Floe RC in 240mm and 360mm variants in Q3 2020. Pricing is unknown.

Hardware Supported
It can support the latest Intel and AMD CPU and compatible with universal sockets (including Intel LGA 1200).

Compatibility
Floe RC360/RC240 CPU & Memory Liquid Cooler is compatible with TOUGHRAM RC DDR4 Memory Modules – Our modules feature the same quality that customers expect from the TOUGHRAM Memory line. Launching in frequencies of 3,200MHz, 3,600MHz, 4,000MHz, and 4,400MHz in kits of 8GBx2 modules; users may find a configuration to fit any PC allowing installation capacity of up to 32GB on mainstream 4-DIMM slots. 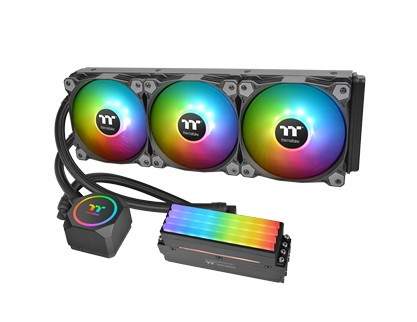