Hexus offers some commentary about a slide that reveals the new PL1 and PL2 (power limit) and Tau values of Intel's Comet Lake-S desktop processors.

Compared with the previous generation, there are some big changes. Previously, PL2 was never more than 25 percent higher than PL1 for desktop chips, but now we can see values that are significantly higher. High-end chips like the Core i9-10900K with a PL1 of 125W can now maintain up to 250W for up to 56 seconds. The energy-saving models with a 35W TDP are allowed to draw up to 123W in bursts of up to 28 seconds.

In previous generations PL2 never crept above PL1 by more than 25 per cent, or 1.25x, claims ComputerBase. In the chart above there are some extraordinary PL2 values specced by Intel engineers, given that previous baseline. The recently reviewed Intel Core i9-10900K and Core i5-10600K, for example, have a PL2 increased by a factor of 2x and nearly 1.5x, respectively. In the table provided you will also notice that Intel furnishes these K suffixed processors with a Tau of 56s. All other consumer desktop processors will only maintain PL2 for 28s at the most. 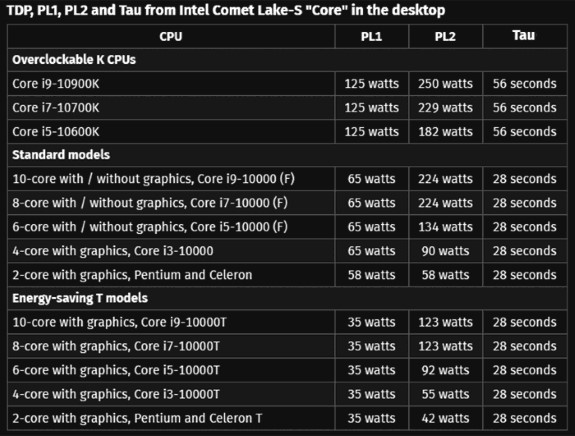