Microsoft is making some changes to the distribution of the preview builds of Windows 10. Previously, the software offered "Fast Ring" and "Slow Ring" test versions of Windows 10 to people who enjoy being unpaid beta testers. Now Microsoft is shaking up this concept by getting rid of the rings in favor of a new Dev Channel and Beta Channel.

The Dev Channel is largely similar to the Fast Ring, it's pitched as a way for highly technical users to get early access to the latest Windows 10 features. The downside is that Dev Channel releases will have some instability as these contain the highest number of bugs.

For Windows Insiders, the move to channels will be easy. If your device is currently flighting, we’ll automatically move your devices based on your current ring to the new channel that best corresponds with that experience. You won’t have to take any action for this change to happen.

Insiders can always adjust these settings by going to Settings > Update & Security > Windows Insider Program if they want to change channels and try out new experiences. 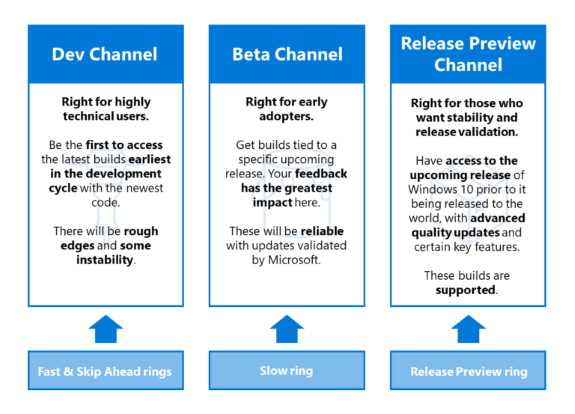