Posted on Wednesday, June 24 2020 @ 10:43 CEST by Thomas De Maesschalck
Sharkoon typically introduces mainstream products but every once in a while the company reveals more premium-style products. Today the firm announces its REV220, a new ATX mid-tower case with an aluminium front panel and an interior design that rotates the motherboard 90 degrees, which results in vertical installation for the rest of the hardware. The REV220 has a tempered glass side panel and features five 120mm fans, which includes two RGB LED fans. The case is sold for 107EUR.

Sharkoon Technologies is an international supplier of PC components and peripherals, offering performance at a reasonable price. With the REV 220 ATX midi tower, Sharkoon now presents another PC case in the REV series. Like the REV200, this case also possesses a clever and revolutionary case configuration: in comparison to conventional PC cases, Sharkoon has designed for a mainboard which is turned 90 degrees, while the rest of the hardware is thus installed vertically. The PC case is supplied with five pre-installed 120-millimeter fans for the necessary airflow. A cable compartment at the top and a multi-functional tunnel at the bottom also ensure a neat and tidy appearance inside the case.

Chic Front Panel with Carbon Fiber Look
The front of the REV220 has an aluminium plate with a diamond cut. This impressively sets the stage with an RGB background illumination. The plate is placed on a front panel which has a carbon fiber look, providing a distinctly qualitative design to the casing.

A Case Configuration with a Difference
The REV case series distinguishes itself with a revolutionary case configuration, whereby the mainboard is turned 90 degrees when mounted, and the other hardware components are thus installed vertically. The REV220 also has this rather untypical structure and therefore offers all the positive advantages of the predecessor REV200, while the user can experience an entirely different feeling either when installing hardware or when modding. In addition, the cable compartment under the top panel and the power supply tunnel on the bottom panel both ensure tidiness inside the case.

A Fresh Wind from Five Pre-Installed Fans
There are ventilation slots on the sides of the front panel, through which three of the pre-installed 120-millimeter fans ensure a constant airflow. This is supported by two further 120-millimeter fans in the back of the case, which, with their addressable RGB lighting, contribute to an ideal illumination of the hardware inside. In order to further optimize cooling performance, it is also possible to install two 140-millimeter fans in place of the three 120-millimeter models. The front of the case also allows for the installation of a radiator with up to 360 millimeters. In the back of the case, the two pre-installed fans can be replaced by two 140 millimeter versions or a radiator with up to 240 millimeters. The magnetic cover on the top of the case is perforated and thus also supports the air exchange.

The View Inside
The side panel, made of tempered glass, not only completes the timeless and elegant design of the REV220, but it also offers an unobstructed view of the installed hardware. For this purpose, the glass is securely attached via screws on the back of the case. In combination with the RGB lighting of the two addressable fans and the RGB highlight of the front panel, the PC case becomes a real eye-catcher on the top of any desk. And thanks to its reversed design, the case can also be easily placed on the left side of the desk. The fans in the back of the case are also compatible with the RGB synchronization technologies Asus Aura Sync, MSI Mystic Light Sync, Gigabyte Fusion and ASRock Polychrome SYNC. For mainboards without a suitable RGB connection possessing the pinout 5V-D-G or 5V-D-coded-G, the lighting can be controlled via a switch on the top of the case. For an even more extensive illumination, additional, optional LED components can be connected to the pre-installed RGB controller.

Plenty of Room for Components

The REV220 does not lack space for components: Graphics cards with a length of up to 32.3 centimeters, power supplies with a maximum length of 20 centimeters and CPU coolers with a height of up to 16.5 centimeters will fit into the casing. In addition, up to two 3.5-inch hard drives and two SSDs can be installed in the removable cage within the power supply tunnel. Behind the mainboard tray, there are locations for two more SSDs. 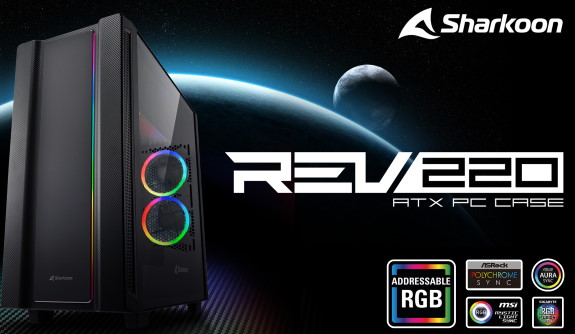