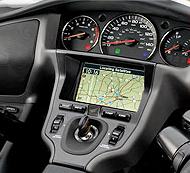 Gary Kelley, Garmin's vice president of marketing, says this marks the first time that Garmin has provided a vehicle manufacturer with a factory installed navigation system. He further adds the Gold Wing is Honda's premier touring bike and navigating the highways and byways should now be a lot easier with Garmin on board.

The feature will be called Honda Satellite Linked Navigation System and is the first fully integrated navigation system for motorcycles. The GPS system has a large 7-inch display and should give clear turn-by-turn voice prompted directions through the motorcycle's audio and intercom system.