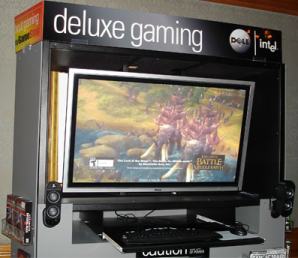 Dell released new XPS PCs , a new XPS notebook and a big 50-inch Plasma and 32-inch LCD display three days ago and they also presented their deluxe gaming platform which in in processof rolling out to GameStop stores in the U.S. nationwide.

The kiosk lets shoppers test out what Dell bills as a “deluxe gaming” platform consisting of an XPS 600 with a massive LCD display. The kiosks will no doubt garner a lot of attention when they start showing up in stores, though Dell may find that the extreme gamers they’re targeting with the platform aren’t willing to wait in line behind the hordes of 12-year-olds that will inevitably hog the kiosk.