Here is the first photo of the Intel Alder Lake-S

VideoCardz does it again, the site has another world exclusive with the first photo of the future Intel Alder Lake-S processor. Alder Lake-S is the successor of the 14nm Rocket Lake-S, it will be fabbed using Intel's 10nm SuperFin technology and should hit the market in the second half of 2021.

Alder Lake-S is expected to feature up to eight Golden Cove cores and up to eight Gracemont cores in an ARM big.LITTLE-like configuration. Basically, you get large cores for high-performance tasks and small cores to deliver higher energy-efficiency.

The integrated graphics are likely based on Xe-based Gen12 and the chip will have a new LGA1700 socket, so a new motherboard will definitely be required. Alder Lake-S is expected to support DDR5 memory and PCI Express 5.0.

According to recent rumors, Intel intends to keep the LGA1700 socket for at least three generations. The socket itself has already been a topic of rumors before and it was revealed that the package dimensions for the mainstream desktop series will change to 37.5×45 mm (7.5mm taller than LGA1200). The photo of the CPU that we have appears to confirm those dimensions.

You can see a photo of an Alder Lake-S engineering sample below. The rear has exactly 1700 contact pads. 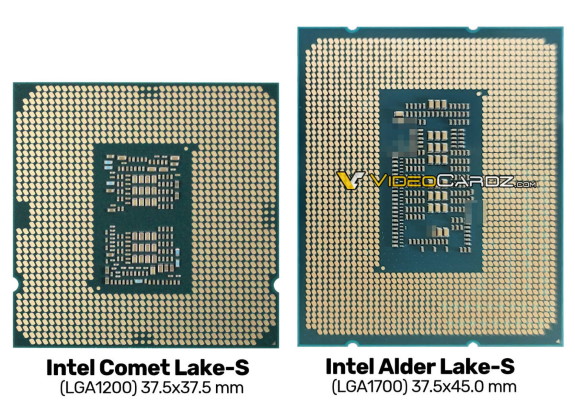