NVIDIA reported it fiscal Q3 2021 earnings. The GPU designer broke several records, it achieved a record-high revenue of over $4.72 billion (up 57 percent year-over-year) and both the Gaming and Data Center units smashed through previous revenue records.

NVIDIA beat analysts' expectations, revenue was $310 million higher than projected and non-GAAP EPS of $2.91 was a beat of 36 cents. Despite big issues with GeForce RTX 30 series availability, NVIDIA's Gaming segment revenue was up 37 percent quarter-over-quarter and 37 percent year-over-year.

For the current quarter, NVIDIA expects record revenue of $4.8 billion, plus or minus 2 percent. That's significantly higher than consensus of $4.43 billion. No dividend increase for the second year in a row though, presumably as NVIDIA wants to keep more cash on its balance sheet for the ARM acquisition. 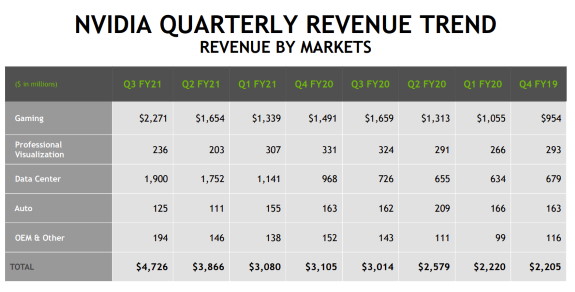 “NVIDIA is firing on all cylinders, achieving record revenues in Gaming, Data Center and overall,” said Jensen Huang, founder and CEO of NVIDIA. “The new NVIDIA GeForce RTX GPU provides our largest-ever generational leap and demand is overwhelming. NVIDIA RTX has made ray tracing the new standard in gaming.

“We are continuing to raise the bar with NVIDIA AI. Our A100 compute platform is ramping fast, with the top cloud companies deploying it globally. We swept the industry AI inference benchmark, and our customers are moving some of the world’s most popular AI services into production, powered by NVIDIA technology.

“We announced the NVIDIA DPU programmable data center processor, and the planned acquisition of Arm, creator of the world’s most popular CPU. We are positioning NVIDIA for the age of AI, when computing will extend from the cloud to trillions of devices.”