Details about NVIDIA's mobile GeForce RTX 30 series were published by WCCF Tech. With the current generation of AMD-based laptops, there are no models with high-end discrete video card from NVIDIA because the Ryzen 4000H series mobile processors are limited to PCI Express 3.0 x8, which was reportedly a stumbling block for laptop makers. This is no longer a concern with the Ryzen 5000H series and word on the street is that we'll see Ryzen 5000H processors paired with discrete video card from NVIDIA all the way up to the mobile RTX 3080.

We have heard that AMD Cezanne (Ryzen 5000H) laptops were already listed on long-term roadmaps and datasheets with GeForce RTX 3070 and RTX 3080 graphics cards. Though the prototypes of next-gen GPUs have only started shipping to ODMs last month, so OEMs (companies working with ODMs) have not yet received the prototypes with such configurations. Regardless of this fact, the slides that appear to have originated at NVIDIA, would ultimately confirm that the company is ready to support AMD Ryzen 5000 CPUs. This will undoubtedly put a lot of pressure on Intel, which dominated the gaming laptop market for years.

While laptops with the Intel Tiger Lake-H should arrive in Q2 2021, it appears laptops with the AMD Cezanne-H are further away. According to Videocardz, AMD will announce the Ryzen 5000H series at CES 2021 in January but the first laptops aren't anticipated until late 2021. 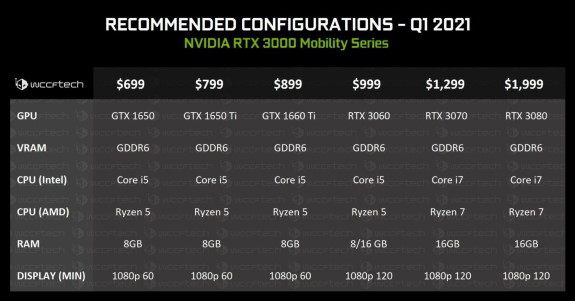