Posted on Wednesday, Nov 25 2020 @ 20:52 CET by Thomas De Maesschalck
UL Benchmarks announced two new features for its 3DMar benchmark suite. First up, there will be a feature that will let you compare the 3DMark score of your own system with results from other systems with the same components. Secondly, the company cooked up a new feature that will predict what sort of framerates you will get in popular games.

However, this performance estimator is exclusively available in the paid versions of 3DMark and it's quite limited. At least initially, only five games are supported and you can only choose 1080p Ultra or 1440p Ultra settings. Ray tracing is not supported either.

More than a score With the launch of new graphics cards from AMD and NVIDIA, 3DMark is more popular than ever. PC gamers submitted more than one million benchmark results with 3DMark last month.

But we also see many gamers turning to forums and social media to ask for help with understanding their benchmark scores. That’s why we’ve spent the last few months redesigning the 3DMark result screen. We want to help gamers answer questions like, “Is this a good 3DMark score for my PC?” and “How does my 3DMark score relate to game performance?”

Learn more about your PC’s performance
3DMark now shows you how your benchmark score compares with results from other systems with the same components. This makes it easy to see if your PC is performing correctly.

3DMark score comparison chart
3DMark shows how your score compares with other results from the same hardware.

This new chart shows the range of scores submitted by other 3DMark users with the same combination of CPU and GPU.

The peaks in the chart show the most common scores. The green line shows your score. The blue, dotted line shows the average score for your combination of components.

If your score is close to the average, it means your PC is working as it should. A score well below the average could indicate a hardware or configuration problem. The best score gives you an idea of the overclocking potential of your setup.

This new part of the result screen shows estimated game performance based on your 3DMark score. In this first release, you can choose from five popular games: 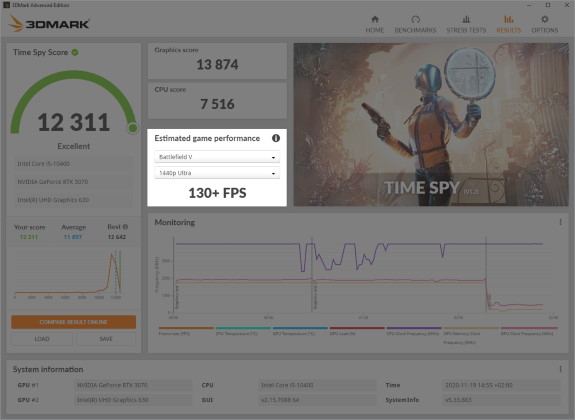 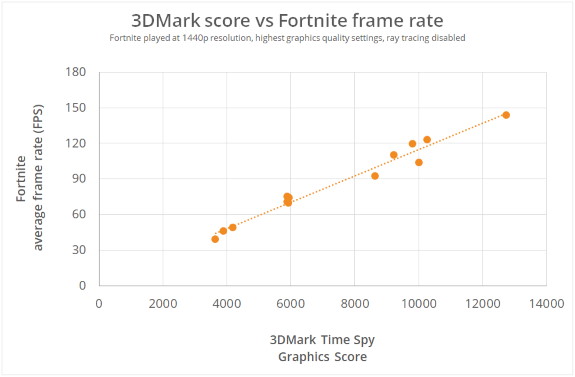