Tested: How much faster is Apple M1 versus Windows on ARM?

With Microsoft giving Windows on ARM the ability to do emulation of 64-bit x86 applications, it's now possible to draw more direct comparisons to see how well Windows on ARM compares to Apple's macOS on ARM.

We already know Apple has given Windows on ARM a massive beating, but just how big is the performance difference? PC World has performed some tests and concludes Windows on ARM is basically on life support. The M1-based MacBook Air basically blows Windows on ARM based devices like the Surface Pro X out of the water.

There's no indication that Qualcomm is working on a faster chip with Windows on ARM support so things look pretty grim for the platform.

Microsoft’s 64-bit X86 emulator is still in beta, so we can’t make definitive statements about its success. But it’s hard to believe that further development will bridge the vast gulf of performance between Windows on Arm and Apple’s M1-based Macs. In six months, Microsoft may be able to boast that its emulation performance has improved by a significant amount. But without the combined miracle of a much better CPU from Qualcomm or another Arm chipmaker and continued improvements from Microsoft, the future of Windows on Arm looks grim.

Here is a dramatic example of the performance in HandBrake, an opensource video transcoding tool. The Surface Pro X took about two hours to transcode a 12-minute long 4K video into a 1080p H.265 format. Apple's M1-based MacBook Air did it over 6x faster. 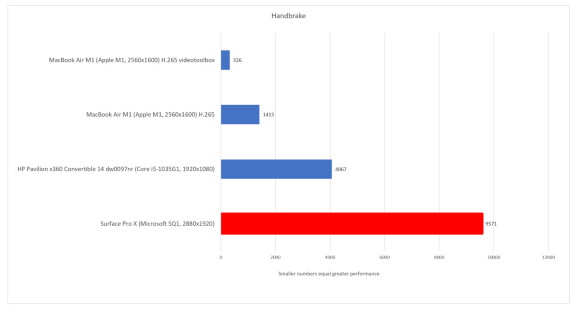