NAND flash controllers to get more expensive due to capacity constraints

Posted on Thursday, Dec 24 2020 @ 12:24 CET by Thomas De Maesschalck
TrendForce reports the price of NAND flash memory controllers is bound to increase due to tightening production capacity at TSMC and UMC. It's a problem that's impacting a lot of the electronics industry right now, as evidenced by the shortages we've seen in recent months. The research agency expects NAND flash memory controllers will get about 15-20 percent more expensive in Q1 2021.

Overall the impact shouldn't be that big as NAND flash memory controllers make up a small fraction of the production cost of a solid state disk. Controllers for consumer SSDs are believed to cost around $6 a piece. On the bright side, the cost of most types of NAND flash memory is expected to decline in Q1 2021 due to oversupply.

In the upstream semiconductor industry, the major foundries such as TSMC and UMC are reporting fully loaded capacities, while in the downstream, the available production capacity for OSAT is also lacking, according to TrendForce’s latest investigations. Given this situation, suppliers of NAND Flash controller ICs such as Phison and Silicon Motion are now unable to meet upside demand from their clients. Not only have many controller IC suppliers temporarily stopped offering quotes for new orders, but they are also even considering raising prices soon because the negotiations between NAND Flash suppliers and module houses over 1Q21 contracts are now at the critical juncture. The potential increases in prices of controller ICs from outsourced suppliers (IC design houses) are currently estimated to be the range of 15-20%.

With regards to the demand side, demand has risen significantly for eMMC solutions with medium- and low-density specifications (i.e., 64GB and lower), for which NAND Flash suppliers have mostly stopped updating the NAND Flash process technology, while maintaining support with the legacy 2D NAND or the 64L 3D NAND process. This is on account of strong sales for Chromebook devices and TVs. As older processes gradually account for a lowering portion of bit output proportions from NAND Flash suppliers, these companies are exhibiting a lowered willingness to directly supply such eMMC products to clients. As a result, clients now need to turn to memory module houses, which are able to source NAND Flash components and controllers, to procure eMMC products in substantial quantities.

Hikes in prices of controller ICs will lead to hikes in module prices with mainstream 32GB and 64GB solutions for Chromebooks experiencing largest increases
TrendForce points out that even though the whole NAND Flash market is still in oversupply right now, medium- and low-density eMMC solutions will likely experience price hikes as they are in tight supply due to insufficient output of controller ICs. An increase in prices of controller ICs will result in a corresponding increase in the fixed costs of eMMC solutions. This, in turn, will put pressure on OEMs that are procuring components. With this scenario now becoming a reality, prices of those eMMC solutions that are in high demand could rise slightly in 1Q21. Examples include 32GB and 64GB solutions for Chromebook devices. 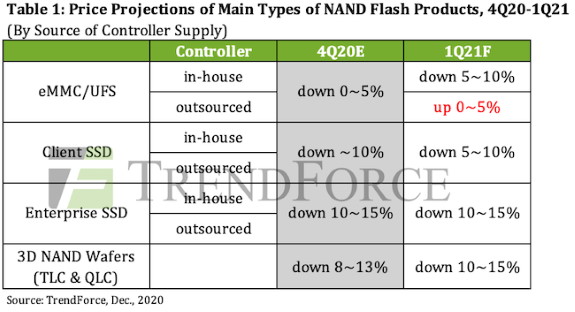