Posted on Tuesday, Dec 29 2020 @ 10:31 CET by Thomas De Maesschalck
Because the supply of AMD Navi 21 GPUs is very limited, most video card makers are delaying various models as it doesn't make sense to release parts that will barely be available anyway. GIGABYTE did just reveal the Radeon RX 6900 XT GAMING OC 16G, which is the company's new AMD-based flagship.

The new variant is a triple-fan, triple-slot model that measures 286mm x 118mm. It has two DisplayPort 1.4a and two HDMI 2.1 ports. The card has a 1815MHz base clock (default value) and a 2285MHz Boost, which is a paltry 1.6 percent more than the reference model. Pricing should be above the $999 charged for the reference card but it's unknown when it will be available.

Gigabyte does not reveal any details on the PCB design and cooler internals, however, it appears that the cooler has two large heatsinks with a large copper plate attached to at least six copper heat pipes. The PCB features three 8-pin power connectors, setting it apart from cards such as NITRO+ or ROG STRIX, which are both limited to dual 8-pin connectors. The Gaming OC also features dual-BIOS, but the manufacturer does not specify the specifications for both modes. 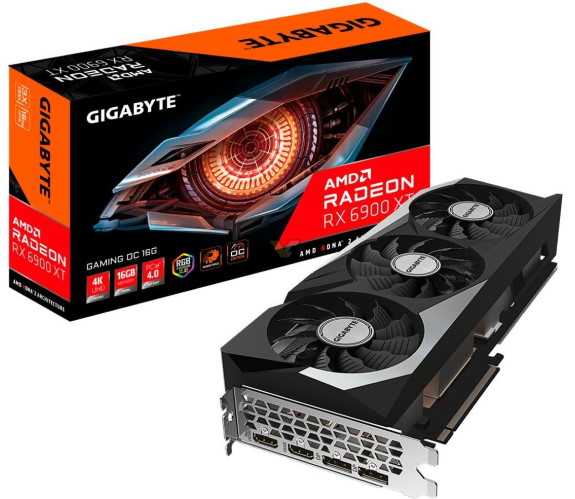