Apple M1 and A14 Bionic SoC dies get compared

The most impressive new processor of 2020 was not a new design from AMD or Intel, but Apple's debut in the computer processor market. The M1 SoC is an evolution of the ARM-based design the Cupertino-based company uses for its mobile devices. But just how different is it?

TechInsights performed a die analysis of both the A14 Bionic and the M1 Soc. As you may know, both chips are made on the same process, the TSMC N5 5nm technology. Compared with the A14, the M1 has a 37 percent larger die size.

The M1 has double as many high-performance "Firestorm" CPU cores, double the GPU cores, 50 percent larger Firestorm L2 cache, and double the DDR memory interfaces. The Icestorm CPU cores appear to be identical to the A14, with roughly the same L2 cache size. System cache is 25 percent smaller on the M1 and it has a same-size NPU as the A14.

The M1 also has some specialty blocks, that allegedly offer optimizations for desktop applications. The exact purpose of these transistors is unknown, it's part of Apple's secret sauce. 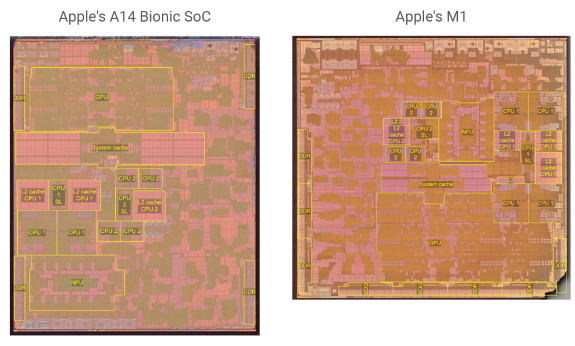