Posted on Monday, Jan 11 2021 @ 10:59 CET by Thomas De Maesschalck
VideoCardz scores another exclusive by posting the first photo of the MSI Z590 motherboard lineup. Intel is expected to introduce the 500-series chipsets at a digital-only CES 2021 this week, after which we can expect a ton of announcements from motherboard makers.

The image below reveals the MEG Z590 GODLIKE, MPG Z590 Gaming Carbon WiFi, and MAG Z590 Tomahawk WiFi (in order of their importance). All three motherboards feature a black/dark grey/silver color scheme. Compared with the Z490 line, there are some changes to the VRM and the heatsinks. More details will follow.

The MEG Z590 GODLIKE is the flagship E-ATX motherboard from the upcoming series. The board received a massive design overhaul compared to its predecessor. We could say that MSI designers were inspired by ASRock X570 Aqua, however, the MSI motherboard is not equipped with a monoblock. Unfortunately, we do not have any specifications yet, but judging from the leaked picture, the Z590 GODLIKE would offer 20 (18+1+1) VRM power phases, while the Z490 series offered 18 in total (16+1+1). 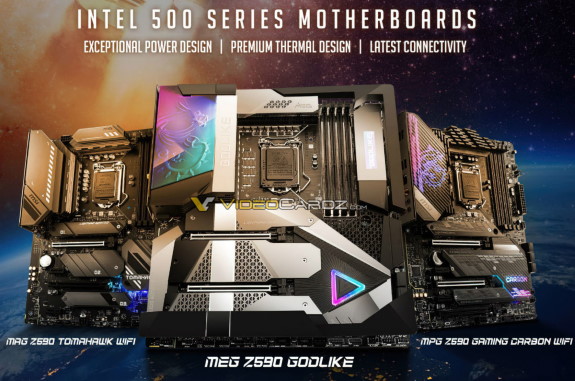