Posted on Tuesday, Jan 12 2021 @ 12:42 CET by Thomas De Maesschalck
Hours before NVIDIA's CES 2021 livestream, VideoCardz managed to score another exclusive. The video card-oriented website published the first photos of GeForce RTX 3060 based video cards with 12GB GDDR6 memory. You can find some photos of Gigabyte cards over here, these are GA106-based models with the same memory capacity as AMD's upcoming Radeon RX 6700 and RX 6700 XT.

NVIDIA GeForce RTX 3060 features GA106-300 GPU with rumored 3584 CUDA cores. Models based on this SKU will look almost identical to the RTX 3060 Ti, despite featuring a different GPU. The two models we are sharing below look exactly the same as their RTX 3060 Ti variants. The RTX 3060 Gaming series are a triple-fan design with a single 8-pin power connector. On the other hand, the RTX 3060 Eagle series are a dual-fan design. Both models are equipped with dual HDMI 2.1 and display DisplayPort 1.4 monitor outputs. 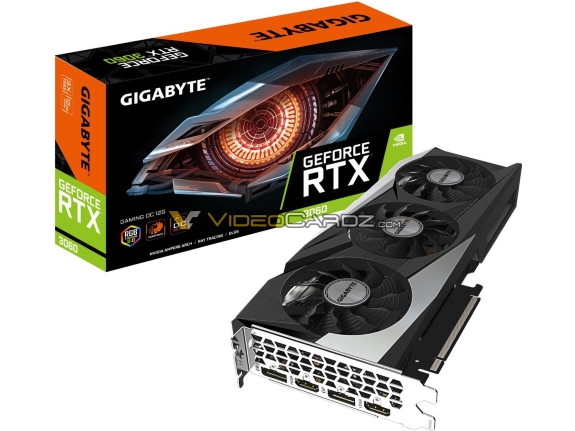