Posted on Friday, Jan 15 2021 @ 10:16 CET by Thomas De Maesschalck
Gigabyte increases its focus on superfast solid state storage with the development of the AORUS Gen4 7000s M.2 SSD. These disks promise read speeds of up to 7016MB/s and write speeds of up to 6881MB/s. The new model uses an unnamed latest-gen PCIe 4.0 controller in combination with 3D TLC NAND flash memory.

Availability is expected by mid-February at the earliest. Gigabyte will offer it in 1TB and 2TB capacities. There is a version with a regular heatspreader and for users who desire the best possible sustained data transfer there's an edition with a massive aluminium cooler with heatpipes. Cooling can help to reduce thermal throttling.

“The storage devices are taking advantage of the PCIe 4.0 transfer speed that raised from 5GB/s to almost 8GB/s, which is great news for users who expect to optimize storage performance and reduce the bottle neck of system operation.” said Jackson Hsu, Director of the GIGABYTE Channel Solutions Product Development Division. “AORUS Gen4 7000s SSDs further advance the standards set by our previous SSD products to provide users with breakthrough performance. After the OS installed, uses can enjoy unprecedented 7GB/s read speed with 1TB or 2TB storage capability. The thermal solution and the double-sided thermal pad are designed to slow down the throttling that might occur at high-speed operation of SSD, thus boost the system performance.”

The high-speed SSD generates heat on full speed operation, and normally thermal throttling is implemented as a safety feature to prevent data loss, or wear-out the memory chips and controllers. The throttling state engages to maintain the stability and durability, however it slows down the performance and it reduces the transfer rate. In order to keep AORUS Gen4 7000s SSD cool while it is running at high speed, GIGABYTE employs the special-designed double-sided aluminum heatsink with Nanocarbon coating. By utilizing the clearance area smartly between slots on motherboards, the size of the thermal fins can be maximized to enlarge the surface area of dissipation. This design can support different M.2 slots perfectly on various motherboards to avoid possible interference by VGA cards installed above the M.2 SSD. AORUS Gen4 7000s SSD also equip high conductivity thermal pad to improve heat dissipation 30% better than metal thermal pad.

For those progressive M.2 users who prefer more extreme thermal solution without installing SSDs between PCIe expansion slots, AORUS Gen4 7000s SSD comes in another version of heatsink with integrated heatpipes. With the same double-sided heat spreader with Nanocabon coating and high conductivity pad design, but optimized on the height and dissipation area, AORUS Gen4 7000s SSD promises the consistent cooling and high performance for those water cooling users to avoid throttling from the overheating caused by no air flow assistance of the CPU fan. Users can customize their thermal allocation according to personal needs by GIGABYTE’s thoughtful design, which balances between the high performance and low temperature. 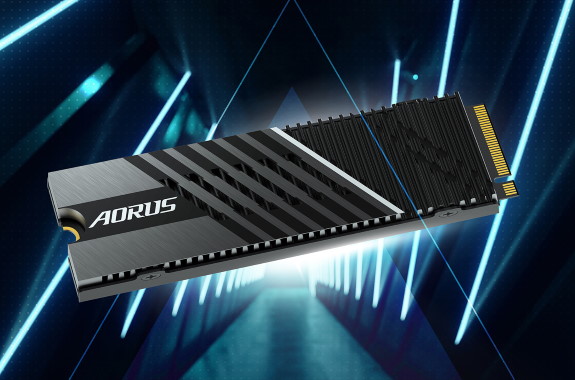 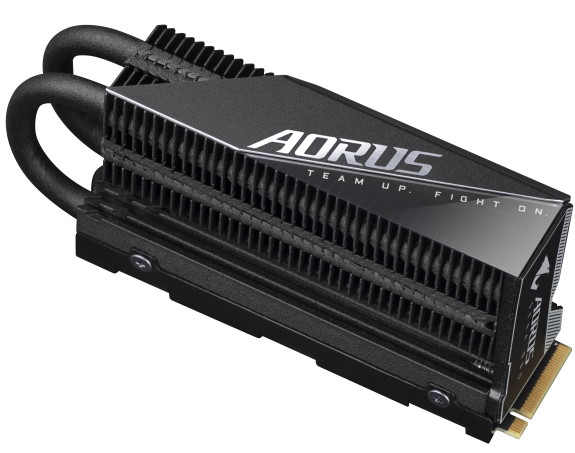