Posted on Tuesday, Feb 02 2021 @ 16:40 CET by Thomas De Maesschalck
A lot of cases look the same so it's nice to see some manufacturers trying out new things. It's not easy to stand out from the crowd as PC case design is limited by various design aspects like the ATX form factor but the new CAST from AZZA looks pretty interesting. This new mid-tower has a removable outer shell and an aluminum wing design that can be opened to enhance airflow. AZZA even designed the case so you can flip it 90 degrees, standing with the rear panel facing down. The case is sold in black and white versions for $209.99.

CAST measures 470mm x 220mm x 460mm (H x W x D) and weighs 10.9kg. It has room for up to three 2.5" disks, one 3.5" HDD, six horizontal and three vertical expansion slots, and a maximum of four fans. Included with the case is a single AZZA Hurricane III ARGB fan. If you want to use watercooling, the case can accommodate a radiator of up to 360mm in the front. A top I/O panel provides access to HD Audio ports, two USB 3.0 ports and a single USB-C port.

AZZA, a leading brand of computer cases and accessories, introduces the CAST ATX PC case that re-imagines the design of a traditional mid-tower. The CAST has a removable outer shell that gives full access to the interior for effortless installation. When fully built, the unique wing design can be completely extended, requiring zero tools to access the interior, or flexed for better airflow. The CAST can even be flipped to a 90-degree orientation.

Cover On. Cover Off.
The CAST design consists of an independent frame and an outer shell with two hinged panels that provides full access to the hardware for maintenance and cleaning, and an easy to latch on/off front panel. When building the system, the entire shell can be easily removed to prevent accidental damages. This also means the shell can be worked on independently for customization purposes.

Unique Wing Design for Easy Access
The unique shell features hinged top and bottom panels, creating wings that wrap around the frame to form the left side panel. In a closed position, the CAST offers a minimalistic look with a cutout window emphasizing the graphics card. When open, it provides access to the inside and also gives an open-air option for improved internal airflow, which can be further enhanced with an included AZZA Hurricane III 120mm ARGB fan at the back, and optional cooling for 2x 240/ 3x 120mm fans or up to a 280/360 radiator at the front.

90-Degree Orientation
Another advantage to the hinged panel is for the case to be turned 90 degrees, standing with the rear panel facing down, giving the CAST an entirely new look to display the hardware installed inside. With enough room at the rear panel and an opening on the right-side panel to run the cables, it is easy to achieve a clean setup while breaking the traditional tower position. 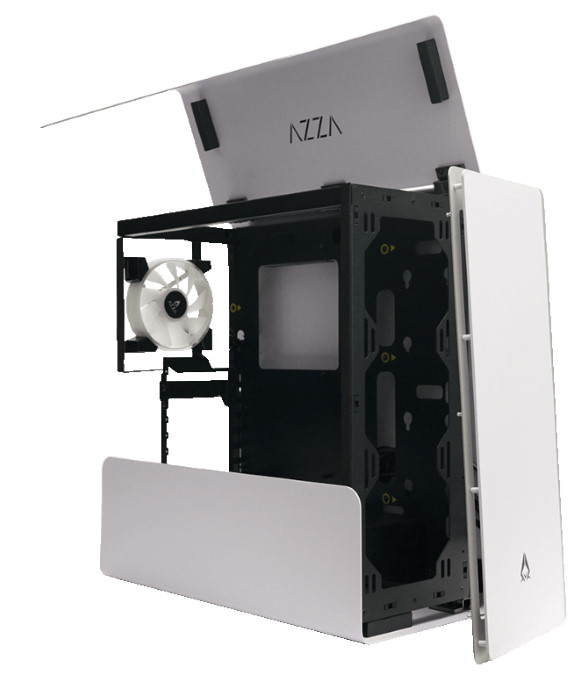 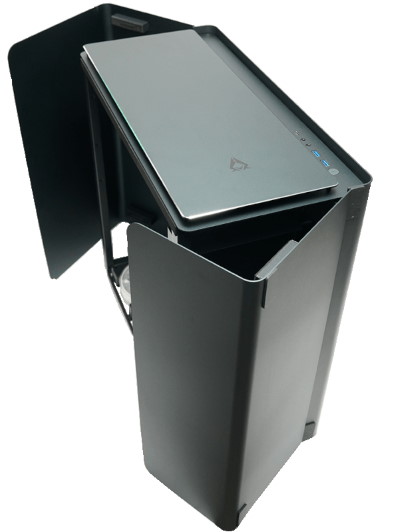