Posted on Thursday, Feb 18 2021 @ 15:40 CET by Thomas De Maesschalck
Last year the work-at-home economy, as well as remote learning, resulted in major shifts in the technology landscape. One of the interesting things is that Google's ChromeOS is now the second most widely used operating system.

Data from market research firm IDC reveals ChromeOS accounted for 10.8 percent of the market in 2020, up from 6.4 percent in 2019. For the first time, ChromeOS is outselling Apple's macOS, primarily because ChromeOS devices captured a lot of sales from the low-end Windows PC market.

Apple ranks third with 7.5 percent marketshare, which is more than the 6.7 percent the Cupertino-based firm held in 2019. The marketshare gains of ChromeOS and macOS come at the expensive of Windows. Microsoft's operating system is still the marketleader of course, but now with only 80.5 percent instead of the 85.4 percent marketshare it commanded in 2019.

The trend looks to be in Google's favor here, but 2020 was far from a normal year. Last month, IDC's report on PC sales showed the first year of consistent growth of traditional PC (desktop, laptop, workstation) sales in years. Even then, IDC indicated that the increase in sales was driven in large part by the expansion of Chromebooks both within and outside of the education market.

Overall, the computer market did really well last year, with the first consistent growth in years. Strong sales of Chromebooks, Mac computers, and gaming PCs accounted for a large share of this growth. 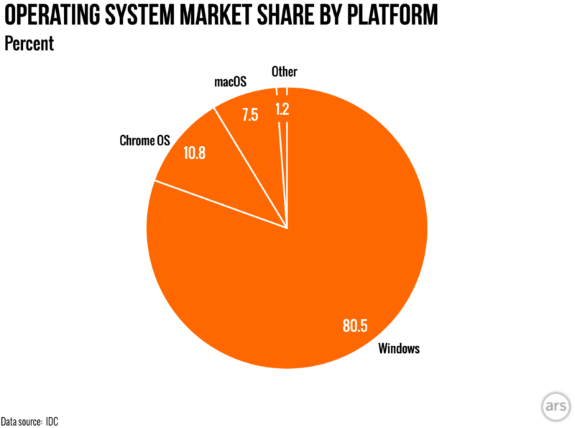