In terms of storage capacity, SSDs are still no match for HDDs. TrendForce estimates 207.39 exabytes worth of SSDs shipped last year, a growth of 50.4 percent year-over-year. The combined capacity of all HDDs shipped in 2020 totaled 1,018.32 exabytes, a yearly growth of 13.0 percent.

The average SSD now has a capacity of 0.62TB whereas the average HDD features 3.92TB of storage capacity. Despite the shrinking number of HDDs sold -- the HDD market surpassed the 1000 exabytes mark for the first time thanks to the large increase in HDD capacity. The server market is one of the primary drivers here.

The continued demand for large capacity HDD storage comes mainly from enterprise servers rather than the PC market where significantly fewer HDDs are being used.

The chart below shows the SSD market in Q4 2020. In terms of unit shipments, Samsung is the single largest SSD shipper with a marketshare of 26.1 percent and WD ranks second with 20.3 percent and Kioxia (formerly Toshiba Memory) ranks third with 10.9 percent, and SK Hynix and Kingston share a fourth place with 10.4 percent each. 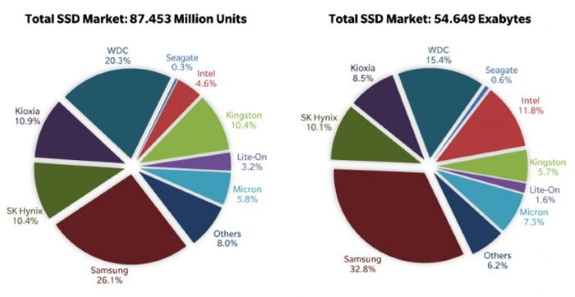