Last quarter, NVIDIA achieved a record revenue of $5 billion. Gaming GPU revenue was up massively versus the same period a year ago and accounted for close to half of NVIDIA's sales. At the same time, NVIDIA GeForce GPUs were hard to find in the retail channel due to chip shortages. Supply is unable to keep up with demand -- a situation that's expected to persist for many more months.

Despite the shortages, NVIDIA still managed to pull in record revenue. One of the big questions concerns the role of cryptocurrency mining. We know industrial-scale miners are buying up everything they can find, in some cases miners are even buying laptops in bulk just to mine coin on GeForce RTX GPUs. 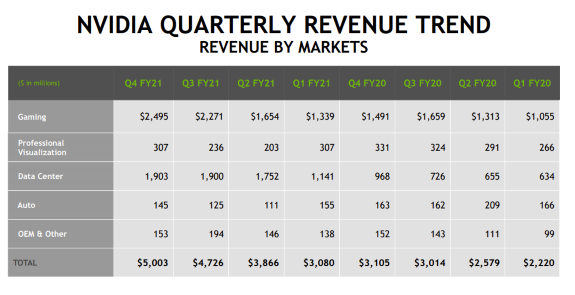 During the previous cryptocurrency boom, NVIDIA saw a massive boost in GeForce GPU sales. At the time, the company attributed the rise to big demand from gamers and claimed mining demand wasn't that big. But after the crypto market crashed in 2018, gaming GPU revenue took a nosedive and it became clear that sales to miners were much higher than what NVIDIA thought they were.

NVIDIA CFO Colette Kress addressed this topic in a conference call with financial analysts. While speaking at the digital Raymond James Institutional Investors Conference, Kress called the GeForce RTX 30 series the best launch ever in NVIDIA's history. She promised supply will be higher throughout Q1 as well as the rest of the year and explained that supply constraints aren't hurting NVIDIA's ability to grow.

Kress believes that even without crypto demand, NVIDIA would have shipped the same number of GeForce GPUs because of the supply constraints. One of the key differences versus the 2018 cycle is that this time, the RTX 30 series is in the early stages of its ramp, and demand from gamers is described as huge.

Our quarter for gaming, for example, probably would have been the same with or without crypto because we're supply constrained. So we'll continue to watch this. We believe that our CMP product will allow us better visibility for understanding the size of crypto within our quarter. - NVIDIA CFO Colette Kress

So yes, miners and gamers are competing for the limited supply of video cards, but NVIDIA thinks all inventory would still have sold out even without crypto demand.