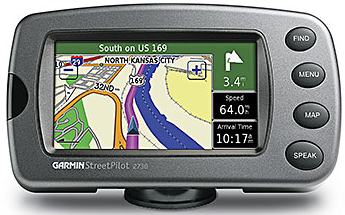 Garmin today announced the StreetPilot 2730, a feature-packed GPS automotive navigator that is the first to offer real-time XM NavTraffic, XM Weather, and XM Radio capabilities in a portable product.

“XM gives our customers even more reason to love the new StreetPilot 2730,” said Gary Kelley, Garmin’s vice president of marketing. “With its integrated traffic, weather, and audio capabilities, drivers can make even smarter navigational decisions – and enjoy their time on the road more.”

The XM Traffic, Weather and Audio capabilities give the StreetPilot 2730 great utility, even when drivers know exactly where they are. XM NavTraffic is the first nationwide satellite-based data traffic information service that enables an overlay of current traffic conditions. Aggregated by NAVTEQ Traffic from multiple sources, the StreetPilot 2730 uses this data to automatically calculate and suggest faster alternative routes – long before traffic starts backing up.

Accidents, road construction or other incidents affecting traffic are graphically represented as icons on the navigation map. Information relating to a traffic incident is also available including the precise location, lanes affected, and the predicted duration. Roadways are color-coded to indicate directional traffic flow speed.

Additionally, the StreetPilot 2730 can also receive XM Weather data. Current weather conditions for over 2000 locations and weather forecasts for 162 cities are easily displayed for locations throughout the continental U.S. County storm and flood warnings are also highlighted, so motorists can make prudent driving decisions.

The StreetPilot 2730 also offers more than 150 channels of XM Satellite Radio, featuring 100% commercial-free music as well as more than 30 channels of news, sports, talk and entertainment. Users can send XM and navigation audio to their car stereo through the StreetPilot’s integrated FM wireless transmitter or 3.5mm stereo, output jack.

The StreetPilot 2730 also comes equipped with an MP3 player that lets users take their personal music collection on the road and browse music by artist, album, song, or genre. Loading music is “drag-and-drop” easy – no special software is required. The StreetPilot 2730 also works as an audio book player, with content available for purchase from Audible.com – featuring more than 70,000 hours of audio programs from more than 200 content partners.

In addition to the turn-by-turn voice prompted navigation available in earlier StreetPilot models, the 2730 actually announces the name of upcoming streets and points of interest – letting drivers keep their eyes on the road while navigating through busy traffic and convoluted roadways. Highly-detailed maps featuring nearly six million points of interest (POIs) throughout the United States, Canada, and Puerto Rico (destinations like hotels, restaurants, gas stations, and attractions) come pre-loaded on the unit’s solid-state memory. If a driver strays off-course, the StreetPilot 2730 automatically recalculates a new route.

Users can also augment the pre-loaded maps with Custom POI’s from industry standard CSV files, such as school zones and safety cameras. In addition, a proximity alert option can warn the driver of upcoming Custom POI’s. This safety feature is designed to help reinforce the importance of traveling at appropriate and legal speeds.

In addition to point-to-point navigation, the StreetPilot 2730 can calculate the most efficient route between multiple destinations – a real timesaver for realtors, sales forces, and errand-runners. Drivers can also tell the unit to avoid specific areas or road segments when calculating a route.

Garmin’s GXM 30 antenna, which is included with the StreetPilot 2730, receives and processes all XM Traffic, Weather and Audio data. For maximum portability, the magnetic, waterproof, puck-sized GXM 30 can be placed on the dashboard or the roof of the vehicle.

The StreetPilot 2730 boasts a 3.8-inch (diagonal) WQVGA automotive-grade color TFT display with touchscreen that automatically adjusts the unit’s backlight for optimum viewability in any amount of light. Drivers can view the map in either a three-dimensional perspective or a top-down track-up or north-up view.

XM NavTraffic, XM Weather, and XM Satellite Radio are available through XM for a monthly fee. A bundled XM subscription (including XM Radio, NavTraffic and Weather service) is offered for $16.94 per month with a one-time activation fee. See www.xmradio.com for pricing and coverage areas.