Some of you may already be familiar with Noctua, they recently launched a couple of very successful silent processor coolers but they also have case fans and chipset coolers. Noctua is a European company, they have their headquarters in Austria and they work closely together with the Austrian Institute of Heat Transmission and Fan Technology (Österreichisches Institut für Wärmeübertragung und Ventilatorentechnik, ÖIWV) to develop high-end sound-optimized cooling products.

The company Noctua was found by the Austrian computer distributor Rascom and the Taiwanese cooling manufacturer Kolink International. Here's a snip of information about what the name "Noctua" means and why they picked an owl as their company logo:

The little owl, Athene noctua, is the symbol of the Greek goddess Athene, who represents wisdom, science and strategy. She has a marked preference for the most clever among the Greek heroes, like Odysseus, who endure their adventures by the use of savvy consideration instead of mere force. Until today, the owl symbolizes intelligence and prudence, its manlike face emblematizes attentiveness and communication. We from Noctua follow the suit of its calm and accurate observation in the dark, its soundless flight as well as the effective, economical use of its powers and precise attack.

I suppose that's enough Greek mythology for today ;) Lets take a look at the products that will be reviewed today. In front of me are two Noctua case fans: the 120mm NF-S12-1200 and the 80mm NF-R8. 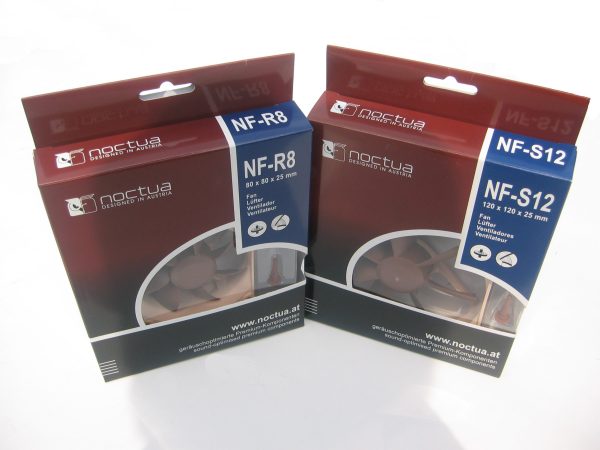 Both products ship in a nicely designed cardboard box. 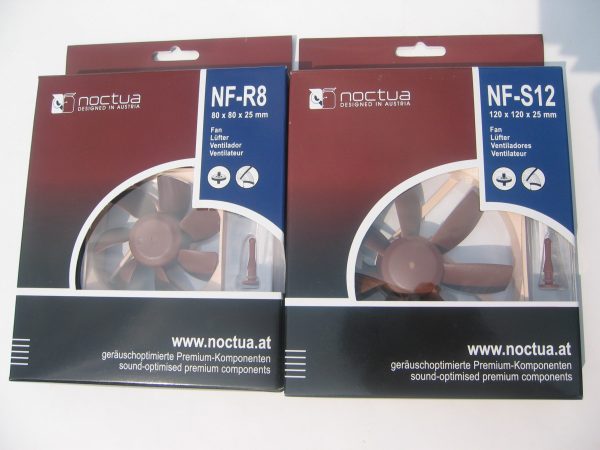 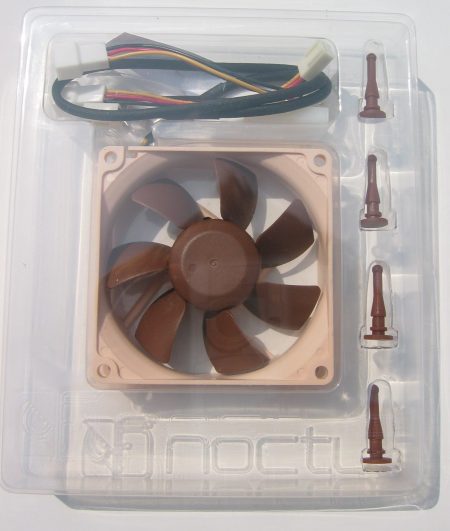 Noctua NF-R8 specifications: As we can see from the specifications these fans feature lots of optimizations to make them as quiet as possible and they also promise a very long lifetime of more than 17 years.

The company says this is the first fan that uses a 80mm rotor designed by the Austrian Institute for Heat-Transmission and Fan Technology, this rotor features a bigger distance between the rotor and the stator to reduce noise. The blades are optimized for maximum efficiency, they should perform 10% better than conventional blade geometries, and the fan also features a self-stabilizing oil-pressure SSO bearing. This new bearing reduces resistance, abrasion and noise emission and should last a lot longer than conventional fans. 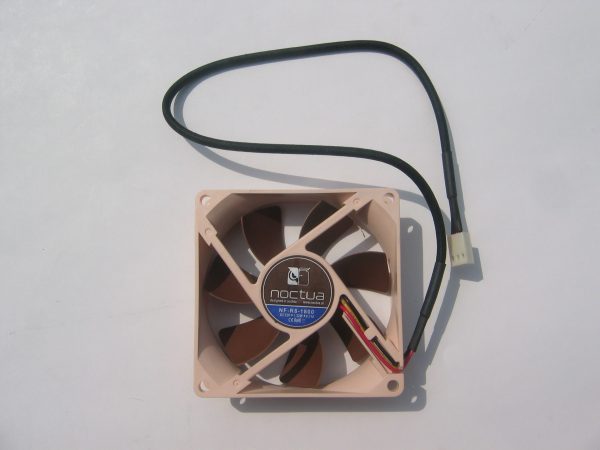 The fan has redish fan blades and a light-brown enclosure. Personally, I think this looks quite good but I can imagine that some people may not like the color scheme of these fans. I also noticed that the cables of both fans have been nicely sleeved. 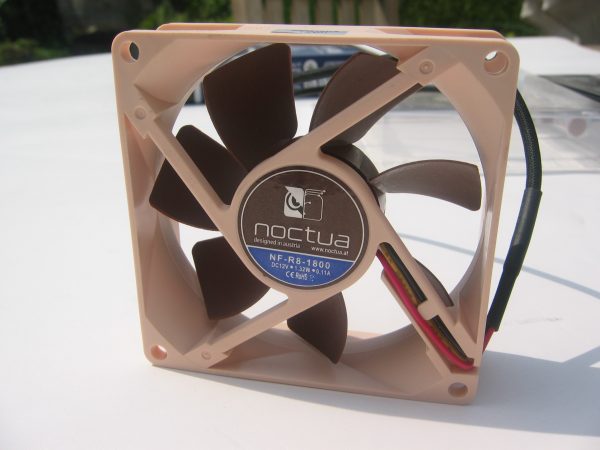 As you can see the fan blades look a bit different than normal fans, they were designed this way to make them more silent. 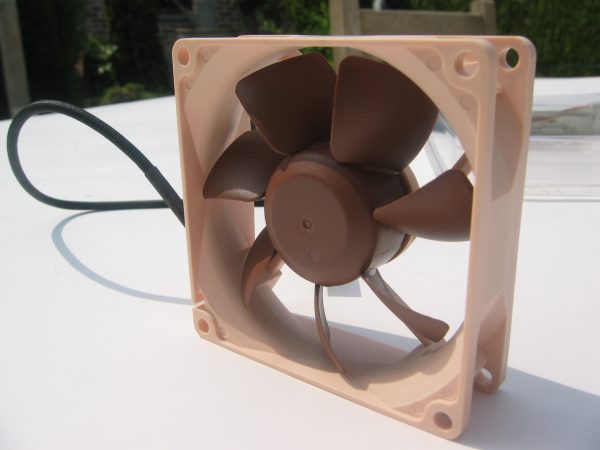 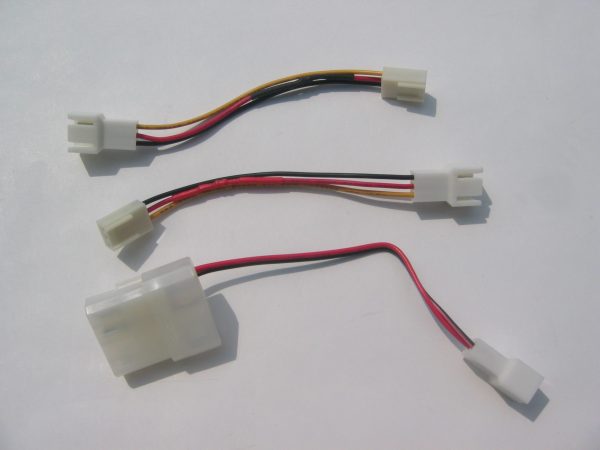 Here are the three adaptors. The first one is a 3 to 4-pin adaptor, the other two are the low-noise-adaptor (L.N.A.) and the ultra-low-noise-adaptor (U.L.N.A.). The L.N.A. and U.L.N.A. adaptors have a resistor to reduce the voltage, this makes the fans even quieter. But this comes at a price of course, the lower the voltage the slower the fan will spin.

Here's a table which shows you how this affects the airflow and the noise level: 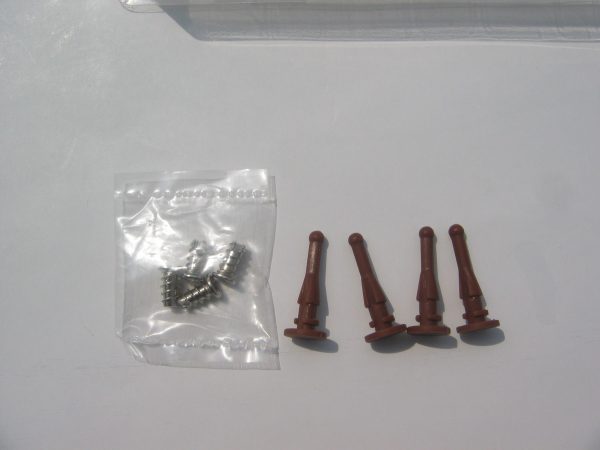 Besides the fan and the adaptors, the package also includes four fan screws and four vibration compensators.

Comment #1 posted by sissy on 2007-05-11 05:33:26
The cold cathode fan, not only provides cooling for your system but will fully light most cases. For those that might not know, a Cold Cathode Fluorescent Light (CCFL) is a neon light that produces very little heat and virtually no noise.
A CCFL fan uses a round cold cathode tube in the shape of a ring. The ring fits around the outside of the fan. A 360 lighting view is obtained with the ring as opposed an LED which is a focused form of light. This means that a CCFL will light a larger amount of space than a LED. UV lighting is not a bright light to the eyes. UV light reacts with the UV sensitive sources around it.