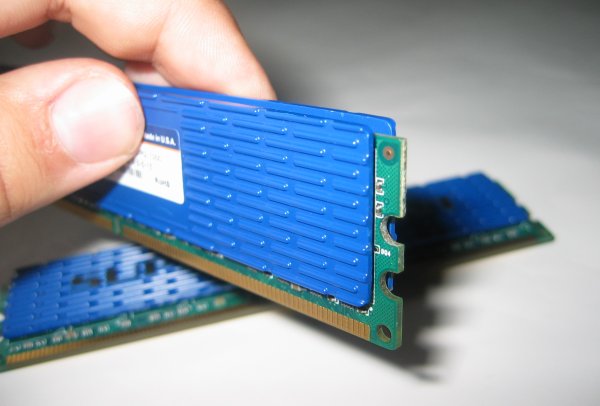 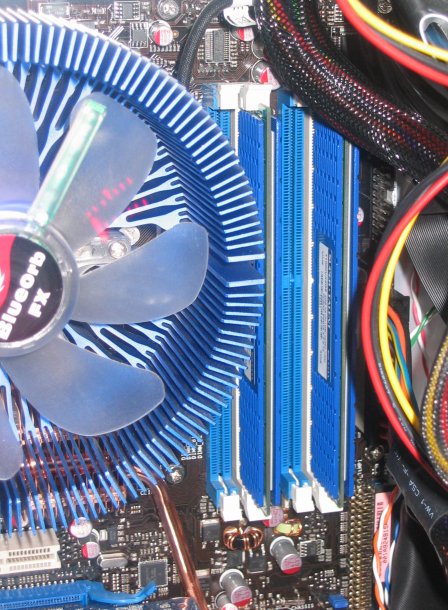 Overclocking and benchmarking
To get the benchmark results I tested the memory at five different settings. For the first three tests I didn't overclock my E6400 processor and just played with the memory divider. First I tested the RAM at 667MHz and 800MHz at 4-4-4-10 timings. These tests were done with a voltage of only 1.9V and the system was very stable during these tests, I bet it's possible to get even tighter timings by boosting the voltage a bit further. The third test was with the memory overclocked to 1066MHz, which is a bit higher than the advertised clockspeed. At a voltage of 2.3V I was able to tighten down the memory timings to 5-4-4-12 at 1066MHz.

For the next two tests, I overclocked my system's FSB from 266MHz to 300MHz to get the memory at 1000MHz with 5-5-5-15 timings, which is the advertised speed of these modules. This was done with the advertised voltage of 2.2V and the system ran very stable and I didn't get any errors during a couple of hours of testing in Memtest. I managed to get a bit tighter timings than the advertised timings (from 5-5-5-15 to 5-4-4-10) but didn't manage to reach CAS4 without further increasing the voltage to 2.45V. Maybe I wasn't lucky enough as I've noticed that other reviewers managed to get this memory kit to run stable at 1000MHz with 4-4-4-12 timings with a voltage of 'only' 2.2V.

I then tried to get the memory to higher clockspeeds at 5-5-5-15 timings but failed to get the memory much higher than 1066MHz at a voltage of 2.3V. I could still boot into Windows at a clockspeed of 1083MHz but the system wasn't stable enough, I could run some SuperPI benchmarks at this clockspeed but in the middle of 3DMark the system just rebooted. It's possible to get the memory stable at higher frequencies by giving it more voltage but I don't really recommend this as this can seriously reduce the lifespan of your memory kit. A couple of weeks ago NVIDIA and EVGA released a statement that prolonged application of 2.4V and higher is deadly for DDR2 memory kits.

Here are the benchmark results. Unfortunately, I wasn't able to compare this memory kit to other memory kits as I didn't have any 2GB DDR2 kits which could reach such high frequencies. 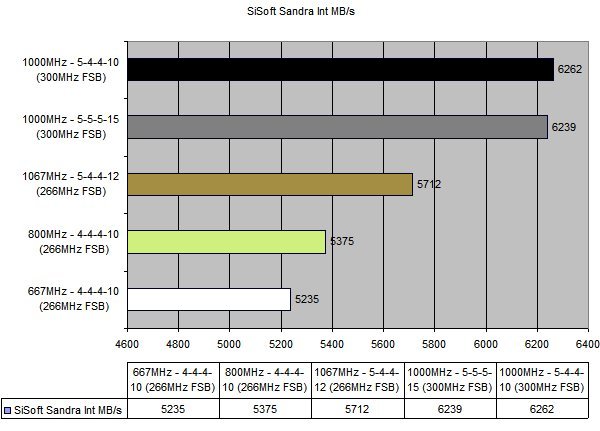 And here's the floating-point performance: 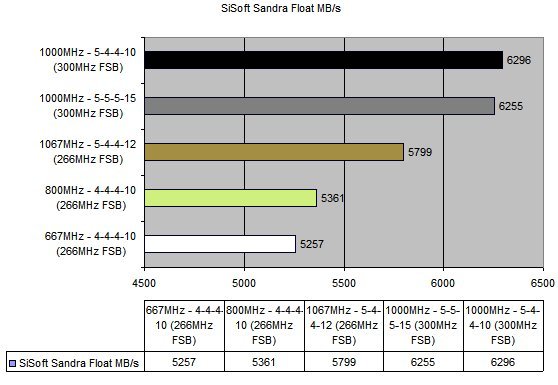 SuperPI
I used SuperPI to see how fast the system could calculate 2 million digits of PI. These benchmark results are in seconds so lower is better. 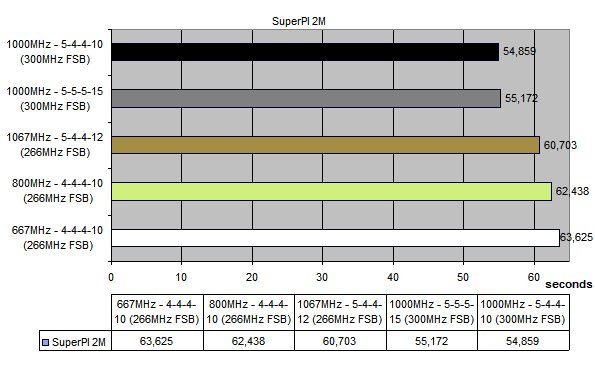 PCWizard 2007 Memory Latency test
PC Wizard 2007 was used to check the memory latency. This is in nanoseconds so lower is better. 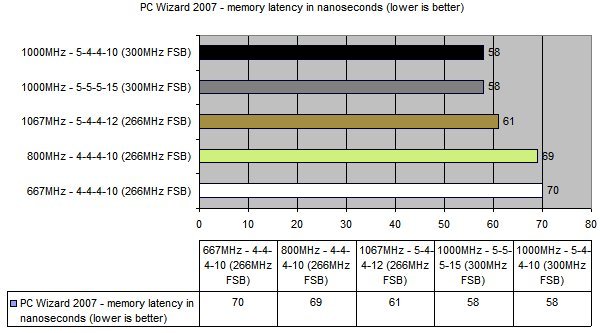 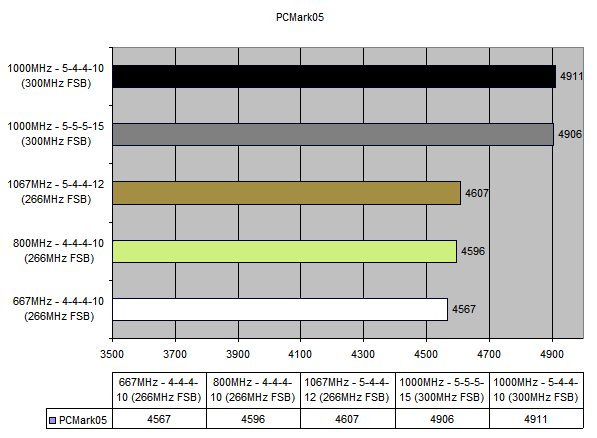 3DMark 2001SE
Although this benchmark is already pretty old and not supported anymore by Futuremark it's still pretty popular. 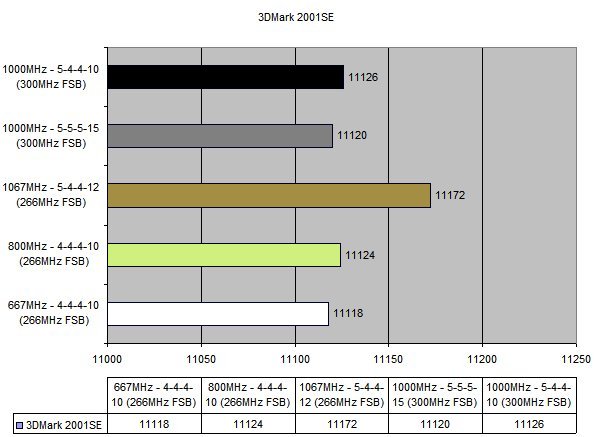 Aquamark
This is a benchmark from Massive Development which uses a real gaming engine. 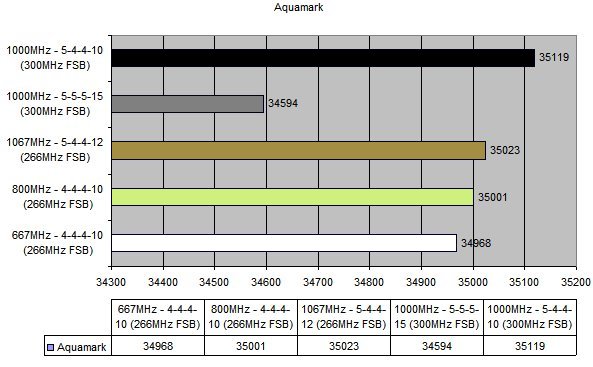 And here's the CPU score: 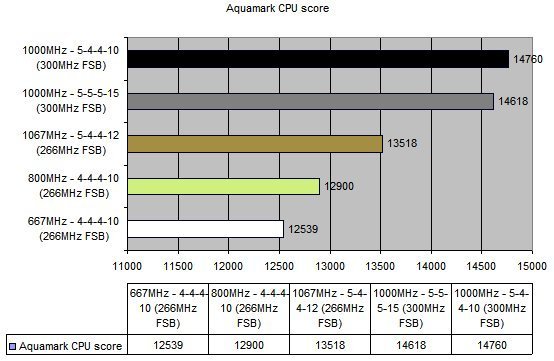 WinRAR
For the last test I used WinRAR. This file compression program features a build-in test which shows how much MB/s your system can process. 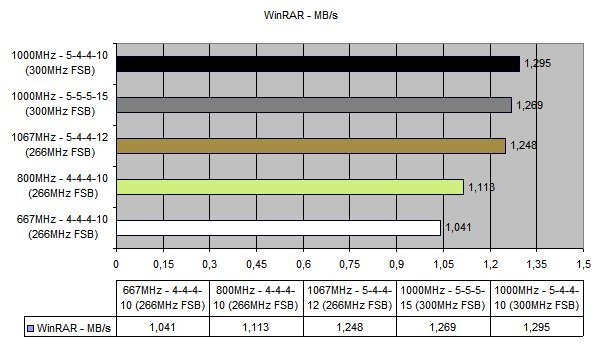 Conclusion
The Super Talent T1000UX2G5 PC2-8000 2GB memory kit ran very stable and performed pretty well at its advertised default speed. In fact, I was able to get slightly tighter 5-4-4-12 timings and overclock the memory to 1066MHz and the system remained rock stable. It's possible to get even better timings or higher frequencies but unfortunately my kit wasn't capable of overclocking to 1100MHz or higher without pushing fairly high voltages through the memory modules.

During my tests I also noticed that these modules run fairly cool. I took measurements with a laser temperature meter and found that the heatspreader never exceeded a temperature of 45°C during my stress testing.

Overall I definitely recommend this memory kit if you're looking for a nice kit that can achieve at least 1000-1066MHz. But that brings us to the biggest problem of the Super Talent T1000UX2G5 memory kit: the availability. Although this kit has been on the market for quit some time, you can still barely find it and most stores that do have it in their inventory are selling it at a premium price. One U.S. store even dares to ask as much as $499.99 for this memory kit! Pricing in Europe is a bit better, in Germany I was able to find this memory kit for 199.95EUR.