A power supply. Most people won't look at this when buying a new pc and will just buy an as cheap as possible generic PSU. But do you know that maybe all those annoying crashes you get can be caused by your generic PSU that doesn't give the right voltages to your components?
Today we'll be taking a closer look at Skyhawk's (mostly known because of their cheap aluminum design cases) SH400A8H, an ATX 400W power supply with aluminum housing. 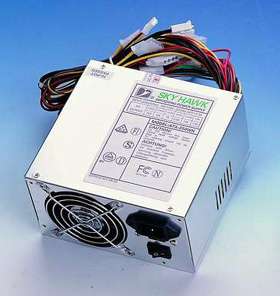 
Now first let's take a look at the back. At the back of this aluminum PSU you'll see a standard fan grill on the left, much better than those ugly and big pieces of steel with just a few small holes in it to allow a very little bit of airflow that you'll find in most cheap PSU's. The fan is temperature-controlled by a controller that sits in the PSU, how higher the temperature how higher its RPM. So this will reduce the noise of this PSU a lot because the fan will only run at its maximum when needed. (Lowest speed is 38% at 20°C, the highest speed is 97°C at >75°C)
On the right side, you'll see a connector for the power cable (which was also included in the package), a switch to switch the input voltage from 115V to 230V, be sure to check this first BEFORE booting up your PC because I don't think you'll hardware will like it when you've chosen the wrong one.. And under that switch, you'll find a switch that turns the PSU on or out, this is also a nice feature which you won't always find in all cheap PSU's out there.
On the front and on the left side of this PSU you'll see a lot of holes to allow some more airflow to the fan.

When taking a look on the top of this PSU from Skyhawk you'll see that it's both Intel and AMD approved! Also a sticker with 'Super noise killer' on it, this points out to the temperature controlled fan.

Wow just look at the amount of wires! This PSU got's no less than 8 Molex connectors and 3 floppy disk connectors. And they are also rather long, about 1 meter each so this can cause some wire mess in smaller cases.
In the first pic you'll see a LOT of wire mess, on the second pic I covered most of the wires that I didn't use behind the drive bays. So when you hide some of the wires that you don't use then the wire mess isn't that worse.

Like you can see on the pics most voltages are good, only the 12V line is on the high side.


Conclusion :
Overall this 400W PSU will be a good power supply for most systems out there. It provides 400W, has a nice aluminum housing and its fan is temperature-controlled so this limits the amount of noise coming from this PSU.
I couldn't notice an increased amount of crashes so I also say that it's capable of providing stable power to your PC components.
Also it really has a LOT of long wires, for some people, this is a big pro, but for some others this will cause a lot of wire mess in their case.
The price of this PSU is $60.

The Good stuff :
- It has a nice aluminum housing
- Long wires
- Lots of Molex connectors (eight)
- Temperature controlled fan
- 115V and 230V input voltage
- Intel & AMD approved PSU
- It has a standard fan grill at the back


The Bad stuff :
- Long wires cause some wire mess
- Voltages from the 12V line are a little bit high
- A Mesh sheat for the motherboard connector would have been nice


This product receives an 8/10 from DV Hardware

Comment #2 posted by LSDsmurf on 2003-02-03 15:19:02
Sorry for my bad grammar and spelling, but English isn't my main language :) I'm from Belgium and my main language is Dutch. And yes it's a good PSU, it isn't as good as an Antec TruePower or one from Enermax but hey those cost almost $40 more so it's a very good PSU when you take a look at the price/quality.

Comment #3 posted by Anonymous on 2003-02-03 14:46:43
Check spelling and grammar in your review. Otherwise a decent review. I have had personal experience with Skyhawk, Inc. and their cases/power supplies. They are a good company. Power supply is a little spendy, although it is aluminum.