Fan grills have two main functions: First they offer protection: so you can't accidentally hurt your fingers by putting them between the fan blades, to prevent any of your pets to hurt themselves (like a cat tail between the fan blades.. gotta hurt I think), or to prevent any wires from hitting the fan blades. Another, and these days even more important reason, why people buy them is that they look pretty. There is a lot of variation in used materials for the grills (mirrored acrylic, steel, aluminum,...) and a lot of different designs (for example the very popular Biohazard) and they sure offer a good value to the modding market. PCToys carries a special line of Fan Grills, based on Marvel Comics. They are patented and are 'Very Limited Edition'. There are four different Marvel Comics Fan Grills ; the Punisher, DareDevil, Wolverine, and Spiderman Grills. Today I give you a closer look at the 80mm version of the Punisher and Spiderman Fan Grills.


These two boxes arrived a few days ago from PCToys, on the left we have the Punisher Fan Grill, on the right the Spiderman Fan Grill.


First lets have a closer look on the Punisher Fan Grill

In the first photo, you can see the Fan grill and the plexiglass hole gasket. The black plexiglass hole gasket had a protective adhesive paper cover, on the second picture you can see it without the paper. In the third picture the fan grill. It's made out of steel and the skull laser-cut is done really well, both sides of the grill are exactly the same by the way. One negative point about this grill is that its design restricts some airflow and doesn't really protect your fan for 100%.


Here you can see the Punisher grill on a clear LED fan. My apologies for the fingerprint on the first picture :P

Now a closer look on the Spiderman Fan Grill


On the first picture we have the blue plexiglas hole gasket and the grill. The second picture gives you a better look on the blue plexiglass hole gasket. The third picture gives you a closer view on the Spiderman fan grill. It's made out of steel and has a red colour. This fan grill design won't restrict much more airflow than a normal fan grill, but offers a little less protection. 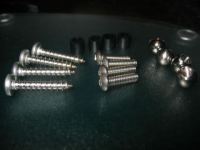 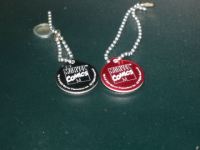 Another small goodie are these Marvel Comics I.D. tags. The black one comes from the Punisher Grill, the red one from the Spiderman Grill.

PCToys advised a few different usages on the box, and this is one of them; as a coaster! With the provided mounting tools it's very easy to assemble it that way, not many fan grills can be used this way! But I don't think many people are going to use it this way, at least I'm not going to do this, I didn't want to make them dirty by spilling any of my drinks on it ;)


After this, I installed the two Marvel Comics Fan Grills inside my case on my 2 exhaust fans (2 clear LED fans). I installed the fan grills together with the plexiglass hole gasket, I first had a few problems getting it in the fan holders from the Antec case, but I was able to do so, after using the Stainless Steel Screws and the spacers. Here are a few pictures to end this review. The second row of pictures was made with a Tri-color Cold Cathode in my case.


Conclusion
Although I'm not really a big Marvel Comics fan, these grills could sure appeal to me! Their high quality combined with their great looks really make them a big hit! They look good in your case and I bet they would even look better outside your case on one of your blowholes. The only negative thing I could find about them was their very high price, $24.95, but for this price, you get a lot of goodies like the plexiglas hole gasket and all the mounting tools. If you're a big Marvel Comics fan or if the high price doesn't scare I would say : Get them now! :P


The Good Stuff
- They're high quality and look very well
- Great for decorative uses
- Comes with a lot of extra stuff
- Can be used as a coaster :P