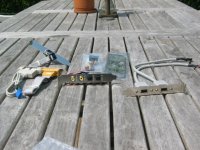 First a small look at the content of the box before we move on to the motherboard. The first image is one of the manual of this motherboard. The second picture contains the registration card, the software/driver CD-rom, Quick install manual and a CD-Rom with Norton Antivirus 2003. On the third picture ; A black 40-wire IDE cable, a black Floppy disk cable, a yellow ATA133 80-wire IDE cable, Two red Serial ATA cables, two diskettes (Silicon Image Serial ATA driver and Intel Application Accelerator Driver). On the fourth picture : Serial ATA power cable, COM2 cable, IEEE 1394 (Firewire) cable, USB 2.0 + Game port cable, S/PDIF cable.

Here you have a look at the motherboard and the backplate. One of the things that catches the eye is the nice Black PCB of this motherboard. Looks a little bit better in your case than those green/brown ones that most motherboard makers used until some time ago. Now, most are using other and sometimes even flashy colors to please the case modders under us. On the I/O plate from left to right : PS/2 keyboard and mouse connector, 4 USB connectors, VGA port, printer port, COM port, LAN port, 2 USB connectors, Speaker out, Line in, Mic in. 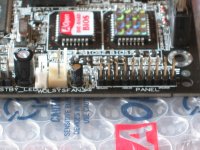 Here we have a look on the connectors, from left to right AUX-in, CD-in, COM2, Game port, IrDA (for infrared modules), Front Audio, SPDIF, SATA connector 3 and 4 (Silicon Image SATA) you can also see the chip from the Silicon Image SATA above the SATA ports, two 1394 (Firewire) ports. The Firewire ports are controlled by the Agere systems FW323-06 controller which you can see in the top right corner of the thirth picture. On the fourth picture Standby LED, Wake On LAN connector, System fan connector 3 and the front panel connectors (for System speaker, Power led, HDD led, ...) 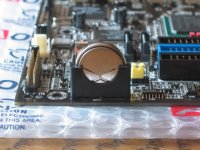 On the first picture you can see the BIOS and the Die Hard BIOS. Thanks to this you can reset your BIOS or boot up with the second BIOS if anything goes wrong. The Die Hard BIOS read and write ROM reserves 4MB for skins and options for the AOpen JukeBox player, JukeBox FM and VividBIOS. On the second picture you can see SATA port 1 and 2 which are controlled by the Intel ICH5R Southbridge controller which you can see on the thirth picture. It also supports RAID 0 (Stripping). The Silicon Image SATA controller supports RAID 0 (Stripping) and RAID 1 (Mirroring)

The first picture shows 2 ATA100 IDE ports and the floppy connector, in the left corner you can see the CMOS clear jumper to reset your BIOS (with the yellow jumper cap) and left of the IDE ports the Case Open connector. The second picture shows the six PCI slots and the AGP slot. This motherboard features an 8X AGP port. When you use SATA devices then you can not overclock your AGP/PCI voltage/clock rates because the clock for SATA can not keep 100MHz then and it will be unstable

Here you can see the memory slots, if you want to use Dual Channel DDR then you'll need to place two sticks of DDR Ram (with same speed and size) in the Blue or Black channel. The jumpers next to the ATX power connectors are for the Dr. Voice II function (We will cover that in the BIOS part of this review).

On the first picture you can see the CPU socket with the CPU retention module. Under it you have the CPU fan connector and left of it 12V ATX power connector and System fan connector 2. Above is a row of Low ESR Capacitors. AOpen claims that these are better than the ones other mobo makers use and that they will provide better stability for CPU power. The second picture shows a big Aluminum heatsink for the Springdale-G chipset. AOpen chooses for passive cooling, but I think they could have better used active cooling, that would have result in better stock overclocking results. They also use the V4 Power Engine (4-phase Pulse Width Modulation)/