Intro
The MCX159 is Swiftech his latest air-cooled Northbridge cooler. It is available for both AMD and Intel motherboards and in this review I'm going to test it on the Pentium 4 platform, with a Springdale motherboard from AOpen. The motherboard has a very simple aluminum heatsink for passive northbridge cooling, and temperatures were pretty high with it. Read further to see what Swiftech his MXC159 Northbrigde cooler was able to do. 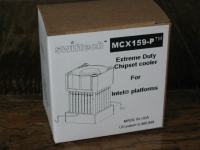 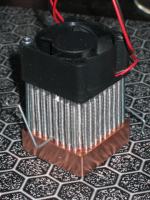 Like I already mentioned in the introduction the MCX159 is available for both the AMD and Intel platform. The only difference is the materials included to attach the heatsink to your motherboard. The MCX159-A AMD version works with tru-motherboard bolts and springs while the MCX159-P for Pentium 4 motherboards works with spring wire-clips. There is also the MCX159-R, which includes both retention mechanisms.

On the above pictures you can see the box in which I got the MCX159-P and on the right, you can see the heatsink of course. The MCX159 has a big copper base to absorb the heat generated by your Northbridge. On top of the copper base are 96 aluminum pins, helicoid shaped to increase their surface area, and thus further increase the heat dissipation efficiency. On top of the aluminum pins is a quiet 40mm fan from Sunon. The weight of the MCX159 is pretty high, 238g. 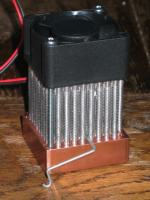 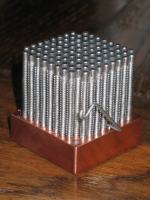 Here are the specifications of the MCX159 heatsink:

Here are the specifications of the 40mm Sunon fan: 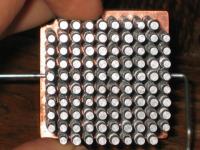 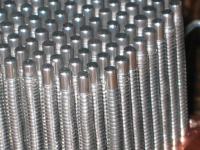 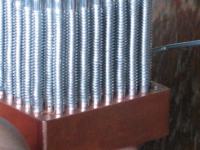 Closer look on the patented Helicoid pins, which are very typical for Swiftech heatsinks. 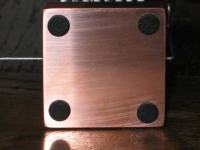 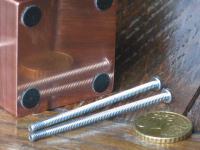 Now let's take a look at the copper base. In order to have a perfect heat transfer between the Northbridge and the heatsink the copper base needs to be flat, not just flat but microscopic flat to create an optimal heat transfer. Swiftech writes on his website that the copper heatsink base is lapped in-house, flat to 3/10th of 1/1000" and hand-polished to a near-mirror finish (Grade 8 Micro Surface finish). Just take a look at the right picture to see the result, a real mirror-like finish, very good job Swiftech! Many heatsink makers can learn something from this. This is the first time that I have seen a heatsink base finished so well. 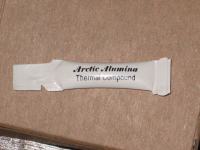 Swiftech is kind enough to provide a bag of quality Arctic Alumina thermal compound together with the heatsink, but for this review we used Artic Ceramique. 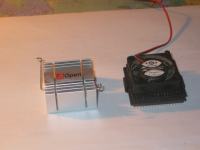 On the left the original aluminum Northbridge heatsink of the AOpen AX4SG Max motherboard, compared to the MCX159 this is a small little thing. The thing next to it is an old AMD K5 133MHz processor with its heatsink attached. It is funny to see that even normal northbridge coolers nowadays are bigger and better than CPU coolers a few years ago.

The installation did not go without any problem because the wire loops were slightly different positioned on my motherboard, but after a minute of bending the wire-clips this problem was solved, and a few seconds later the MCX159 was installed. The thermal compound used here was the Artic Ceramique one. 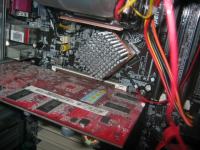 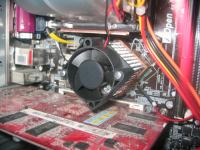 And here are two pics with the MCX159 northbridge cooler installed, with and without the fan.

Now let's check out how this baby performs on our test system!

A few small remarks about the testing procedure:
Stock/OC: First are the results with CPU on standard speed, 2.80GHz. Then we overclock the cpu to 3.40GHz.
Idle/load: Idle conditions are measured after 10min idle in winXP after bootup, and load temperatures after 20min stress. With stress we mean Prime95 torture test along with Folding@home.
Roomtemp: The roomtemperature was around 20.4°C, with small fluctuations of 0.1°C.
Measurement: The Northbrigde temperature was measured with a temperature probe between the northbridge core and the heatsink. 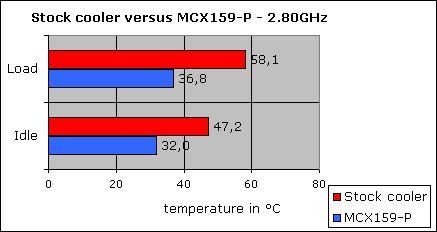 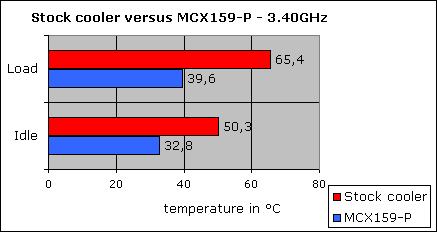 I think these results speak for themselves. The stock cooler clearly couldn't manage his job to keep the Northbridge cool. The actively cooled MCX159-P Northbridge cooler performs a lot better. I tried to break my OC record with this motherboard, but I could not get higher than 3.43GHz just like with the stock Northbridge cooler. It seems that this is the limit for this motherboard, I can still boot, Windows works perfect, but Prime95 Torture tests give errors after test 2, clearly a sign that the system isn't 100% stable.

The sound of the cooler is with its 18dBA very low, with all the other fans in my case I couldn't even hear any additional noise.


Conclusion
This is the first cooler that I have reviewed from Swiftech and I'm really impressed with this company. The MCX159 is a very good Northbridge cooler, and it is clear that they put a lot of work and care into their products. The mirror-finished copper base is a very good example that they try to deliver their products as good as possible. The test results were also very well, the passive cooling with the stock aluminum heatsink clearly could not compete with the big air-cooled copper/aluminum hybrid force from Swiftech!

The bad stuff/Things that could be better
- It's very heavy
- The retention systems might not fit on all motherboards.

"If you did a bit more research you''d know there is a MCX159R which has mounting mechanisms for both clip and 2 hole mounts. Should fit just about any motherboard out there."

You see, with many motherboards, the retention mechanism is clips based around the Northbridge Chipset. These clips however have a limit to how much weight can be hung off it, with the fan placed on top of the heavy heat sink, momentum can cause it break off.

Comment #3 posted by Anonymous on 2003-12-15 04:36:21
I know people that have ripped their NB clips off putting on a passive heatsink. Seems to me weight isn't the only issue. Could be a manufacturer defect with the clip (IC7/P4C800 are good examples), an inexperienced individual putting too much pressure on the clips or spring clip mounts are putting too much pressure on the clips (could happen with a thicker gauge wire).

If weight is an issue, I hope that DVH will treat all reviews in a similar manner and edit where necessary. Why? Because most high performance heatsinks over the last 2 years have exceeded manufacturer's specs... so it should be a negative on all of them.

Lastly, using rumor and scuttlebutt as part of the basis of your conclusion not only compromises the integrity of the review but it devalues it as well.


Comment #4 posted by LSDsmurf on 2003-12-14 22:25:30
Yes I think this is a negative thing, and I do know that the quality materials make it so heavy. Here is what Swiftech says about the weight of the heatsink on their website :


Due to it's heavy weight, we recommend that the MCX159-P™ be uninstalled from the computer for transportation or shipping. This does not apply to the MCX159-A™ which is bolted through the board.

I have already heard a few times in the past that some people had accidentally ripped off the wire-loops of their motherboard by putting a too heavy Northbridge cooler on it.


Comment #5 posted by Anonymous on 2003-12-14 22:04:01
You're kidding right? Heavy is a negative? How so? If you LAN it shouldn't be an issue because you should be traveling with your case on the side, cards facing up. It's heavy because of the copper which provides a great deal of thermal capacitance... the end result is the low temps you've observed.

So would you rather have a light cooler that doesn't cool well or a heavier one that does?

If you did a bit more research you'd know there is a MCX159R which has mounting mechanisms for both clip and 2 hole mounts. Should fit just about any motherboard out there.