ThermalTake has a new innovative CPU cooler, the BlueOrb FX. Just like the iFlash+ 120mm which I reviewed earlier this week, the Blue Orb FX features one of the new LED fans from ThermalTake which displays information onto the fan blades. The BlueOrb FX is even a bit more advanced, it doesn't only show the real-time temperature and a rotating ThermalTake logo, it also shows the noise level. ThermalTake calls the real-time temperature the "T-Visuals" and the rotative logo and noise level is branded as "FlashCool".

The ThermalTake Blue Orb FX features a radian crotched fin design and is compatible with both Intel's LGA775 processors and AMD's Socket AM2. In this review I'm going to test it on the Intel Core 2 Duo E6400 processor. 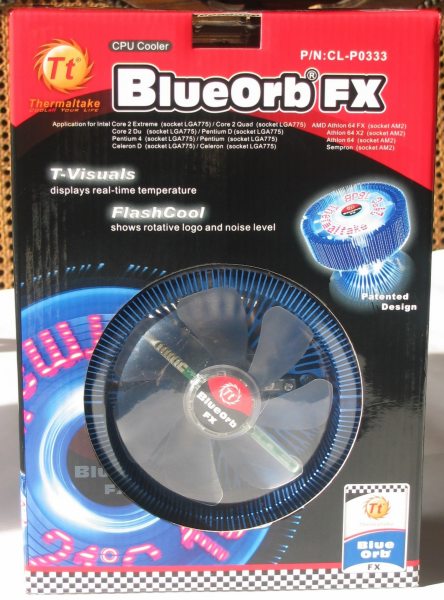 As with most ThermalTake products, the Blue Orb FX ships in a nicely designed package.

Features Specifications:
Processor compatibility list The ThermalTake Blue Orb FX is completely made out of aluminum. This makes it stand out from the crowd as most popular enthusiasts' heatsinks feature a fair chunk of copper in their design and raises some questions about how well the cooling performance of the BlueOrb FX will be.

The HSF looks pretty nice with the aluminum fins painted in blue and the 112mm fan in the middle. 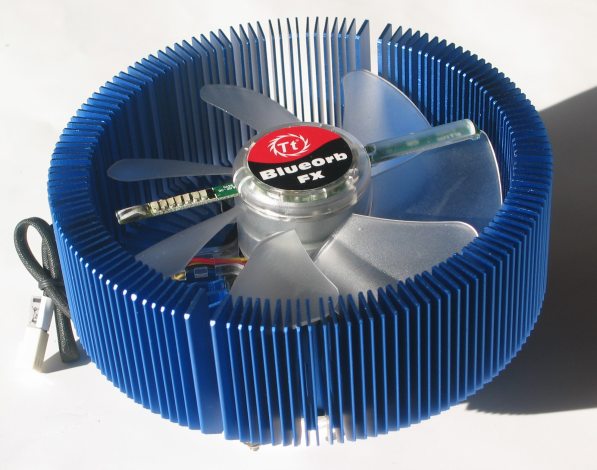 Here's a picture from ThermalTake which shows you how the radiant design of the Blue Orb FX dissipates the heat. 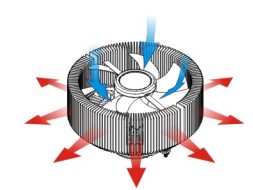 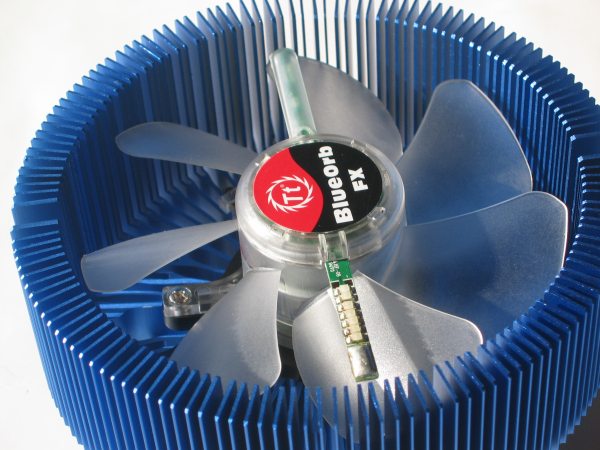 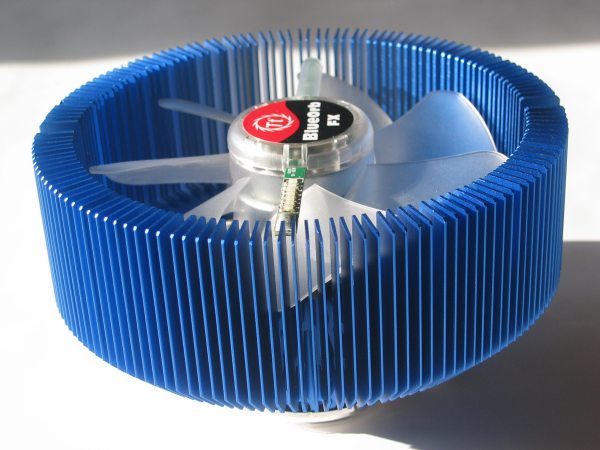 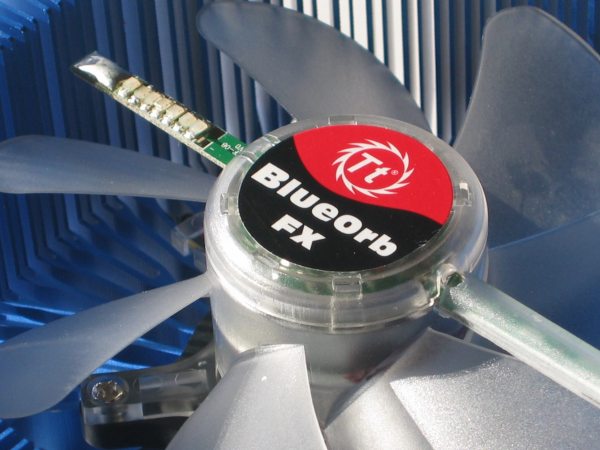 Here's the BlueOrb FX next to the stock HSF which ships with the E6400 processor: 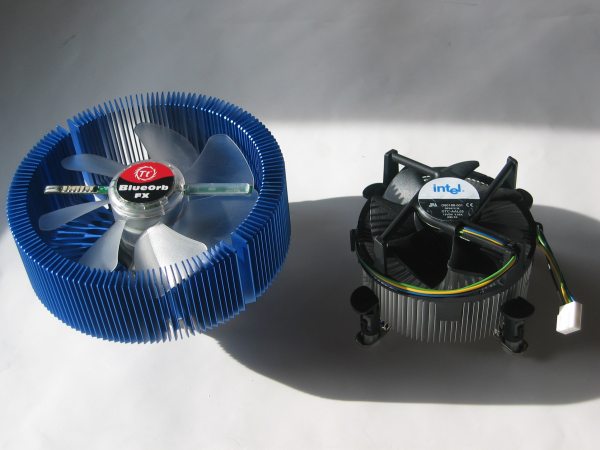 The Blue Orb FX is obviously lots bigger and heavier. 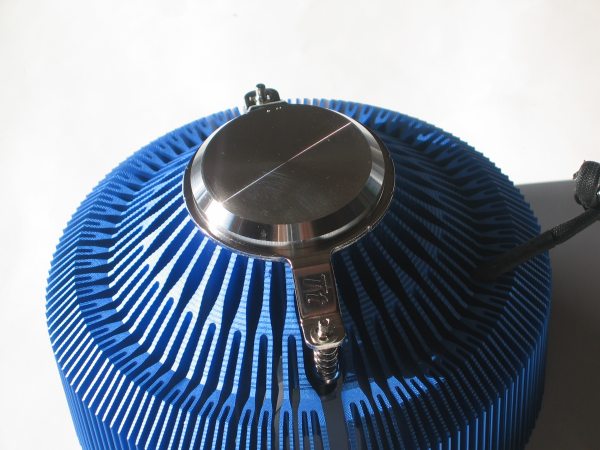 The bottom of this HSF is made out of aluminum, it appears to be quite flat but I did spot some small machine scratches on it. It may be possible to improve the cooling performance of this heatsink a bit by giving the base a proper lapping, the surface wasn't really reflective. 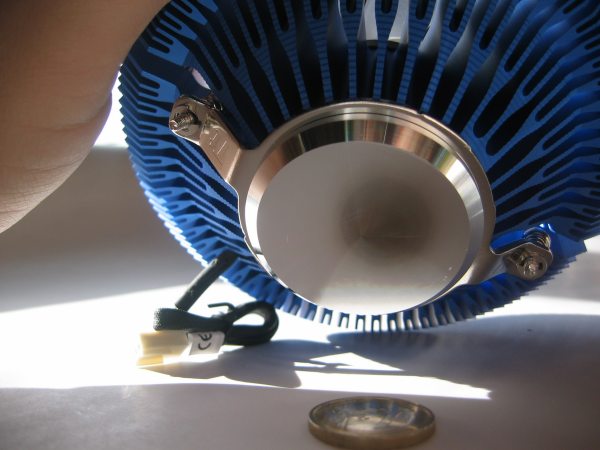 Before we move on to the installation and testing of this HSF, here's a video showing you the capabilities of the LED fan:

The temperature display is real-time but unfortunately, the noise level display only shows the expected noise level of the fan. It would be a lot cooler if the heatsink included a decibel meter so it could provide you with real noise level reading.

Another thing I would like to see in future revisions is a way to connect this fan to a USB port and let the user decide what the fan should display. Right now the temperature info is indeed quite useful but the noise level info isn't really that useful and the spinning ThermalTake logo makes your motherboard one big/small advertising billboard for ThermalTake.

It would be better if the user could display his own name, a short sentence, a slogan, the name of his company, ...

By the way, the temperature display is only in Celsius, and I'm not sure if ThermalTake is working on a Fahrenheit version for U.S. consumers.

Comment #3 posted by Arawn on 2007-03-15 23:22:55
That's the heatsink from the Golden Orb II. They anodized it blue, and added the bling bling. The problem is that the Golden Orb II wasn't a performance cooler, and the advertised 17dB weren't true, there was a really audible hum coming form it. Add the couple rods to hold the LEDs, and the hum increases, due to air drag.

Guess they had a lot of Golden Orb II aluminum available.