Posted on Saturday, Aug 22 2009 @ 16:41 CEST by Thomas De Maesschalck
The big Get Imba announcement from Razer at Gamescom in Cologne is the introduction of Naga, the first mouse designed specifically for hardcore MMO gamers. The Razer Naga sets itself apart by offering a shockingly high amount of buttons, five standard ones and a thumb grid with a whopping 12 buttons. Besides an overwhelming amount of buttons, this mouse was also engineered for maximum comfort for long MMO gaming sessions.

During the press conference Razer said that their research has shown that 12 extra buttons is the maximum that an MMO gamer can use, even though most of them will probably only be able to use nine, six or even less than that. Razer is providing MMO-specific software AddOns for Naga, at Gamescom they gave a demo of Naga in World of Warcraft, it's also available for Warhammer Online and AddOns for MMOs like NCsoft's AION will follow later.

The Razer Naga MMO gaming mouse provides uniquely innovative gameplay features. The Razer Naga’s customizable interface allows gamers to program and command the mouse in-game to fit their specific needs. Razer understands the critical features of the keyboard commands in MMO interfaces; the slightest delay or mistake that occurs in raids and arenas can result in a fatal outcome. The Razer Naga’s distinctive 12 button thumb grid is designed to aid gamers by eliminating excessive clicking on the keyboard spell keys (1 through 12) while freeing up the hands to focus on movement and modifier keys. The Razer Naga is designed to offer a different approach to gaming with instant access to many commands at the click of your thumb, making it more convenient and accessible.

The Razer Naga’s add-on software, in conjunction with the supported titles, enables gamers to save unlimited profiles and program thousands of different in-game commands for each character you choose to play without the hassle of remapping every time you re-spec. The ergonomic form factor gives players comfort and optimized control to every button. Razer’s engineers have raised the bar as the new interfaces of this gaming mouse bridges the gap between the game, peripheral and the user with customization, stimulating interaction and easy control. With the Razer Naga, get overpowered, get the advantage. Get Imba. 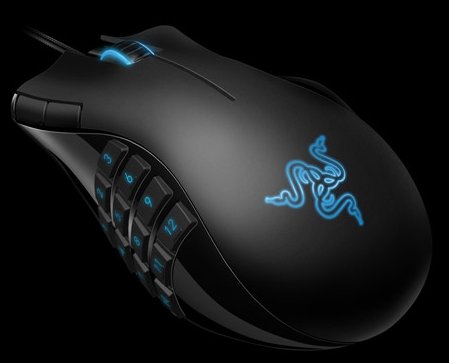