Posted on Tuesday, Feb 27 2018 @ 11:29 CET by Thomas De Maesschalck
Two new reports from Jon Peddie Research hit the web, we'll start with the overall GPU report. The company notes that overall GPU shipments declined 1.5 percent sequentially in Q4 2017. AMD gained some marketshare, at the expense of Intel and NVIDIA. Interestingly, the report also estimates how many video cards were sold to cryptocurrency miners.

Over three million add-in boards (AIBs) were sold to cryptocurrency miners worth $776 million in 2017. AMD was the primary benefactor of those sales.

The fourth quarter is typically flat to slightly up from the previous quarter in the seasonal cycles of the past. For Q4'17, it decreased -1.5% from last quarter and was above the ten-year average of -3.40%.

“Gaming has been and will continue to be the primary driver for GPU sales, augmented by the demand from cryptocurrency miners.,” said Dr. Jon Peddie, President of Jon Peddie research. We expect demand to slacken from the miners as margins drop in response increasingly utilities costs and supply and demand forces that drive up AIB prices. Gamers can offset those costs by mining when not gaming, but prices will not drop in the near future.” 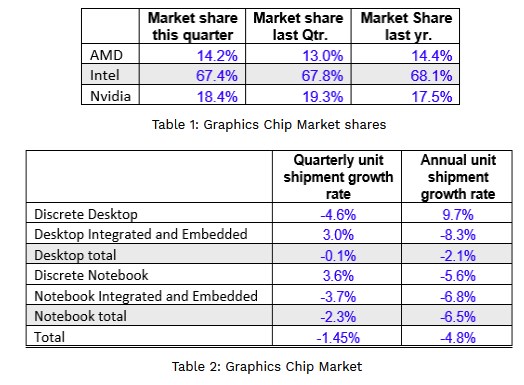