Testing
To test the performance of the Kingston Data Traveler ReadyFlash I ran some benchmarks to measure the read and write speed and to get an indication of the average access times.

Just like in the review of the OCZ Roadster I used my Dell Inspiron 6000 notebook to benchmark this flash drive. 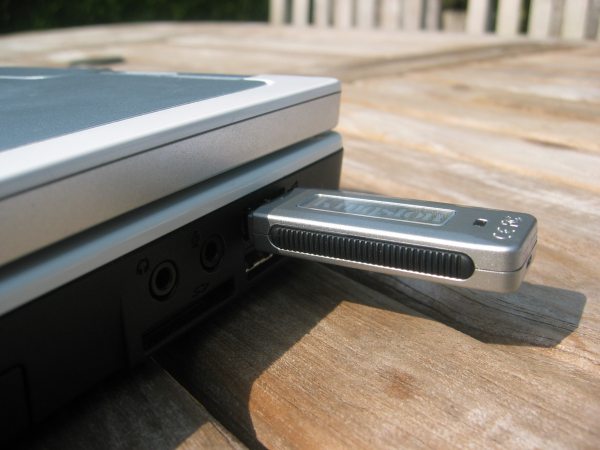 ATTO Disk Benchmark
I used this benchmark to transfer 8MB to the flash drive. The program does this in blocks from 1KB to 1MB. 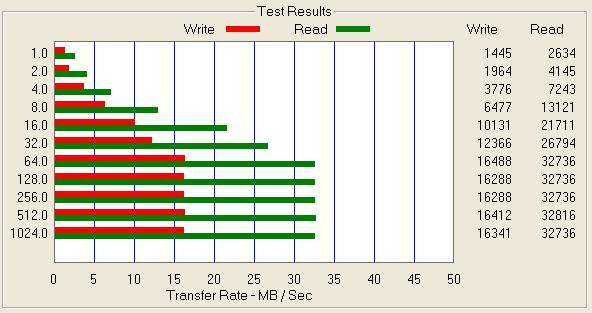 With small 1KB files the transfer speeds are fairly low, but this is a problem that most flash drives have. When you transfer larger files to the flash drive the read speed jumps to an average of 32MB/s and the write speed averages at almost 16MB/s.

HD Tach
I also tested the drive with the Quick Bend from HD Tach. This gives us the burst speed, average read and random access times of the drive. 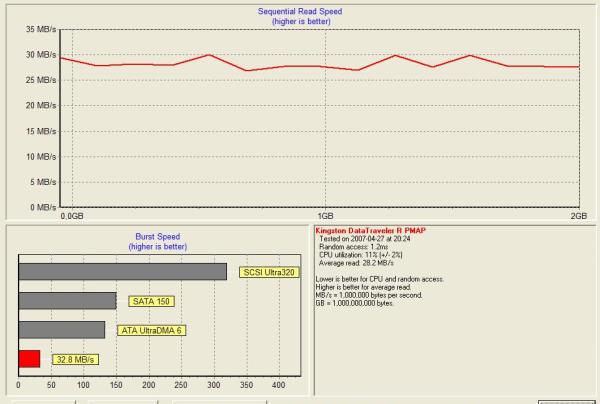 The graph indicates that the sequential read speed on the drive is mainly between about 27MB/s to a bit above 30MB/s. The program found that the average read speed is 28.2MB/s, with a burst speed of 32.8MB/s. The random access time was 1.2ms, which is fairly fast, most flash drives do worse.


Windows Vista ReadyBoost
Now that I've finished benchmarking the performance of the Kingston DataTraveler ReadyFlash I'm going to take a look at the ReadyBoost support.

To use ReadyBoost you just have to plug the flash drive in one of your USB ports. Windows Vista will then start AutoPlay where you can select "Speed up my system", you can then configure how much memory Windows may use from your ReadyBoost drive.

I haven't upgraded any of my test systems to Windows Vista yet for various reasons, so I had to use my girlfriend's Dell Inspiron 6400 for this test.

I couldn't do hours of testing so I decided to run PCMark two times on the Inspiron 6400. The first time I tested the performance of the laptop without the flash drive, and in the second test I inserted the flash drive and configured it to use the full capacity of the DataTraveler ReadyFlash.

Here are the results:

At first glance we see that the benchmark score jumps from 3099 marks to 3230 marks thanks to the DataTraveler ReadyFlash - that's a performance gain of 4.2%. However, when you look closer at the results you'll see that ReadyBoost doesn't make your system faster in all cases. During some tests, the performance was slower, while during other tests the performance was much higher.

Generally, I believe it's still better to buy RAM memory instead of plugging in a flash drive into one of your USB ports to improve the performance of your PC. However, you could consider the extra performance you're getting from the ReadyBoost as a nice "free boost". Memory sticks aren't exactly free, but they are mostly bought to conveniently transfer data from one PC to another one. So if you can also use your stick to improve the load times and general performance of your PC a bit it's a nice extra.

I wasn't able to test this but I believe the performance boost may be a lot bigger on systems with lower hardware specifications. The Dell Inspiron 6400 already had 2GB of RAM memory which should be more than enough in most cases, I suppose that if this laptop had only 1GB of memory the performance boost of ReadyBoost would be much bigger.

Conclusion
The Kingston DataTraveler ReadyFlash drive performed pretty well in my performance benchmarks. The read speeds were really fast and the write speeds are also quite competitive. This drive will be of great use for users who are constantly on the move and the ReadyBoost support may also offer a nice performance boost on computers with a low amount of system memory.

The pricing of this product really depends from store to store. At Kingston's U.S. website you can order the 1GB drive for $24 and the 2GB for $38, but Amazon currently has them for approx. $16 and $33. In some European countries it's possible to find the 1GB version for as low as 14-15EUR and the 2GB version for 23-24EUR.