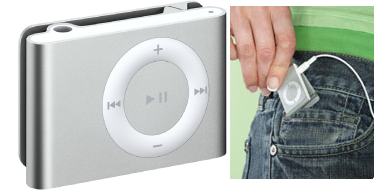 Apple today introduced the new iPod shuffle, now the world’s smallest digital music player with Apple’s pioneering shuffle feature that lets music fans serve up a continuous mix of their favorite songs anywhere they go. Nearly half the size of the original, the new iPod shuffle is just half a cubic inch in volume, weighs just half an ounce and features a stunning all-new aluminum design and a built-in clip which makes it the most wearable iPod ever. The new iPod shuffle contains one gigabyte of flash memory which holds up to 240 songs, and is more affordable than ever at just $79.

“It’s hard to believe the new iPod is a real music player when you first see it,” said Steve Jobs, Apple’s CEO. “But it is real, and holds up to 240 songs in an incredibly compact and wearable design that weighs just half an ounce.”