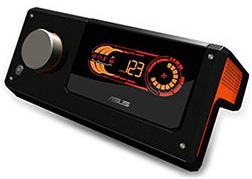 Asus presented its XG Station at CES 2007. It's the first external graphics card for notebooks, besides graphics it also features Dolby support and USB 2.0 ports.

When on the go, compact notebook makes work efficient without adding extra pounds, while at home, large LCD monitor is preferred for enhanced visual enjoyment. ASUS XG Station brings the power of a dedicated 3D graphics engine, providing users with the best of both worlds. Simply plug in the XG Station to the LCD monitor and connect the notebook via an Express Card connector and get ready to game!

XG Station is designed with ease of use in mind. A large LED screen is adopted to provide clear display of critical system status statistics including the following: The Asus XG Station will be available in Q2 2007. The full package will include the XG Station graphics docking station, one ASUS EN7900GS graphics card and assorted accessories.