Posted on Wednesday, Nov 07 2007 @ 14:05 CET by Thomas De Maesschalck
Gigabyte took the time to develop its own GeForce 8800 GT graphics card instead of just using the reference design provided by NVIDIA.

TweakTown snagged a photo of the card: 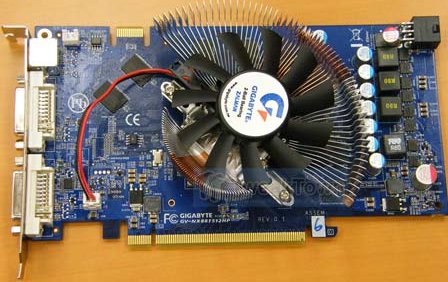 Gigabyte's own 8800 GT uses a much smaller cooling system and features 1ns GDDR3 memory chips from Qimonda. Other improvements include a three-phase PWM design and the use of solid capacitors.

The card will be cheaper than Gigabyte's 8800 GTs that are based on the reference design but it could take about 4-6 weeks before the card will be available in retail stores.