Scientists estimate the amount of frozen methane hydrates is much bigger than all proven reserves of coal, natural gas and oil combined.

Methane, trapped in an icy cage of water molecules, occurs in permafrost and, in even greater quantities, beneath the ocean floor. It forms only under specific pressure and temperature conditions. These conditions are especially prevalent in the ocean along the continental shelves, as well as in the deeper waters of semi-enclosed seas (see graphic).

World reserves of the frozen gas are enormous. Geologists estimate that significantly more hydrocarbons are bound in the form of methane hydrate than in all known reserves of coal, natural gas and oil combined. "There is simply so much of it that it cannot be ignored," says leading expert Gerhard Bohrman of the Research Center for Ocean Margins (RCOM) in the northern German city of Bremen.

A few months ago, Chinese Premier Wen Jiabao held the material in his hand -- or rather, in a metal ice bucket with flames shooting from the top. He was visiting an Australian research center at the time, but now he can just as easily watch the same spectacle unfold in Chinese research laboratories.

The Chinese researchers found the methane hydrate, also known as crystal gas, because of its molecular structure, in a layer of sediment 15 to 20 meters (50 to 65 feet) thick off the Chinese coast. "It was embedded in clay and silt ," says John Roberts, whose firm Geotek provided the technical equipment for the drilling expedition.

This is the sort of information natural gas companies like to hear. The porosity of this sediment mix is well suited to drilling for the gas. "The gas hydrate has never found in this form before," Roberts explains. It suddenly seems conceivable that production using conventional techniques could work.

You can read more at Der Spiegel. The article also contains some information on the work of a German team of scientists that hope to develop a method to obtain the flammable gas with the help of carbon dioxide. The scientists from the SUGAR research project claim up to five molecules of carbon dioxide could disappear into the ice for each dissolved molecule of methane. 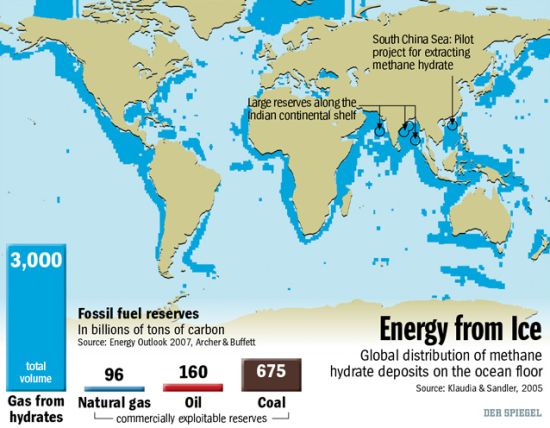