Posted on Thursday, Apr 03 2008 @ 18:30 CEST by Thomas De Maesschalck
SEGA today announced Sonic Unleashed for the Xbox 360, PS2, PS3 and Wii consoles. The firm says the game will use the new Hedge Engine which allows seamless 3D to 2D camera transition in a rich and expansive world with multiple paths to choose from.

Sonic Unleashed is built on a powerful new “Hedgehog Engine”, which introduces seamless 3D to classic 2D camera transitions, whilst delivering a rich and expansive world with multiple paths to choose from. Under development for three years, the Hedgehog Engine produces a visually rich next generation look and feel with elements of classic Sonic gameplay mechanics. The Hedgehog engine will help re-define the gameplay experience for Sonic fans and newcomers to the franchise alike.

“By combining rich and vibrant scenery with dynamic viewpoints Sonic Unleashed will provide an immersive 3D experience whilst keeping alive the 2D gameplay elements and fantastic worlds that Sonic fans know and love” commented Gary Knight, European Marketing Director for SEGA Europe. “In addition to this classic Sonic gaming experience, when darkness sets in Sonic Unleashed players will be able to experience a completely new way to play as Sonic… making this his most exciting adventure yet!”

Having been broken apart by the evil Dr Eggman, it’s down to Sonic to put the pieces of the world back together again by retrieving the power of the chaos emeralds. In doing so, Sonic will find himself in a race against time and faced with an unusual situation that will challenge him in ways never before seen. By completing a wide variety of action-packed stages, spanning the seven broken continents of the world, gamers will need to unleash Sonic’s amazing abilities to save the world, and himself!

The opportunity to engage in Sonic in different ways during the day and night time levels brings a completely original way of playing to the Sonic franchise, in addition to running at high speeds in classic Sonic style, combat fighting will become possible. Super quick Sonic’s speed skills will be highlighted by four new modes, whilst the all new combat, movement and functional abilities will offer depth and variety to the game. As the sun sets in Sonic Unleashed, a different type of adventure will awaken in Sonic’s newest quest….

Here are two screenshots of the game: 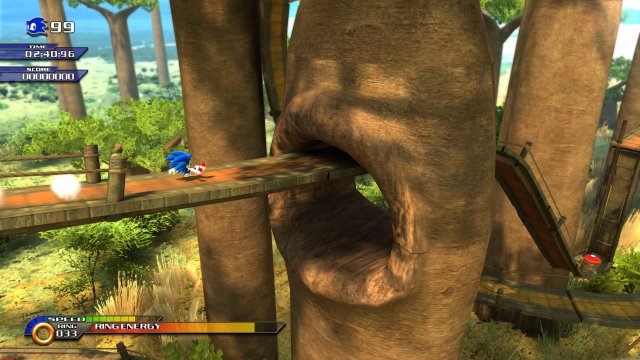