NVIDIA Tegra is a system-on-a-chip for mobile devices 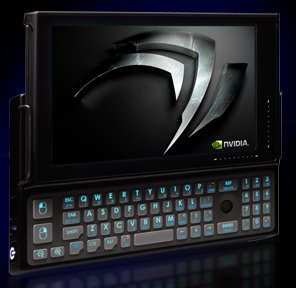 NVIDIA unveiled a new class of system-on-chip (SoC) mobile processors today under its Tegra lineup. The new Tegra 600 and Tegra 650 processors are based on the ARM11 architecture, and thus not x86 compatible, but they are tailored for mobile devices with advanced capabilities and low power consumption.

The new Tegra chips feature an integrated CPU, GPU, northbridge and southbridge and consume very little power. These chips have many of the things a smartphone, a mobile Internet device or a UMPC needs in a package that measures just 144mm². NVIDIA claims this is one tenth the size of Intel's Atom processor (+ the other chips the Atom needs). Furthermore, there's also the APX 2500, this mobile multimedia powerhouse was introduced a few months ago and is also part of the Tegra lineup.

NVIDIA's Mike Rayfield, general manager of NVIDIA's mobile business, says Tegra will end up in mobile Internet Devices (MIDs) with prices from $200 to $250 by the shopping season. The Tegra 600 is clocked at 700MHz and is targeted at devices with a 1280 x 1024 pixel resolution, this chip can decode 720p video. The Tegra 650 on the other hand is clocked at 800MHz, this chip is aimed at MIDs and subnotebooks with 1680 x 1050 pixel displays, it consumes a bit more power but this chip can decode 1080p video. Both chips consume less than 100mW in idle.

"Creating Tegra was a massive challenge. Our vision was to create a platform that will enable the 2nd personal computer revolution -- which will be mobile centric, with devices that last days on a single charge, and yet has the web, high definition media, and computing experiences we've come to expect from our PC," said Jen-Hsun Huang, president and CEO at NVIDIA. "Shrinking down a 50 watt PC architecture will not create the discontinuity this industry needs. The culmination of nearly 1,000 man years of engineering, Tegra is a completely ground-up computer-on-a-chip architecture that consumes 100 times less power. Mobile internet and computing devices built with Tegra are going to be magical."

The new Tegra chips from NVIDIA are competition for Intel's Atom. The Tegra has the advantage of very low power consumption and small size but its strength also brings a disadvantage, the lack of x86 support. This means devices based on the Tegra will be limited to operating systems like Windowe Mobile or CE and other operating systems that may support it like Google's Android.