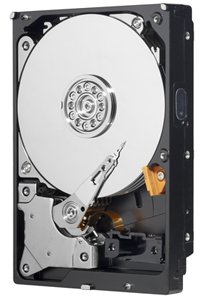 Western Digital introduced world's first hard drive with a storage capacity of 2TB, the new WD Caviar Green features four 500GB platters with 400Gb/inch² areal density. The drive has 32MB of cache, and is optimized for lower power consumption and quieter operation. It's now available for around $299.

WD Caviar Green is one of the most successful product lines in the company’s recent history with its third-generation GreenPower™ technology, now providing 2 TB of proven reliable storage for today’s high-resolution files and graphics. WD Caviar Green drives are designed for use in USB/FireWire®/eSATA external hard drives, desktop computers, workstations, and desktop RAID environments.

A number of advanced technologies enable the speed, capacity and performance of WD’s Caviar Green 1.5 TB and 2 TB hard drives. Those include: StableTrac™, which secures the motor shaft at both ends to reduce system-induced vibration and stabilize platters for accurate tracking during read and write operations; IntelliPower™, which fine-tunes the balance of spin speed, transfer rate and caching algorithms designed to deliver both significant power savings and solid performance; IntelliSeek™, which calculates optimum seek speeds to lower power consumption, noise, and vibration(1); and NoTouch™ ramp load technology, which is designed to ensure the recording head never touches the disk media resulting in significantly less wear to the recording head and media, as well as better drive protection while in transit.