Posted on Tuesday, Feb 10 2009 @ 22:10 CET by Thomas De Maesschalck
Antec announced the CP-850 power supply, one of the first consumer PSUs that breaks away from the standard-size PS/2 form factor. The new CPX form factor from Antec currently only fits in the latest high-end Antec cases, but promises better cooling and improved efficiency. The Antec CP-850 is now available for $149.95. The CP-850 is currently compatible with some of Antec's most advanced gaming and Performance One cases, including the Twelve Hundred, P183 and P193.

Antec, the global leader in computer components and accessories for the gaming, PC upgrade and Do-It-Yourself markets, today announced the CP-850, a high-performance power supply featuring an entirely new form factor. Part of Antec's upcoming CP Series, the CP-850 breaks away from the standard-size PS/2 form factor -- which has been the predominant form factor for nearly 20 years -- to introduce improved airflow, better component selection and quieter operation. The CP-850 and CP Series are exclusively compatible with Antec's latest high-performance PC cases.

The increasing number of performance hardware components has created a need for high-wattage power supplies that can maintain stability at full-load. The limitations of the PS/2 form factor have led to higher costs for consumers and often wasteful energy consumption. Antec's 850-watt CP-850 presents an innovative solution that balances size, cost and quality power.

"With hardware components becoming more and more demanding, the need for high-wattage power supplies has increased enormously. This has also led to higher energy consumption and higher prices for the consumer," said Scott Richards, senior vice president at Antec. "By breaking out of the mold of standard-size units, we were able to create a power supply that is considerably more affordable than other units in the same performance class."

I can't find any photos on Antec's website, but there are some photos on the web of the CP-850 like the one below which was taken by PC Perspective at Computex 2008. 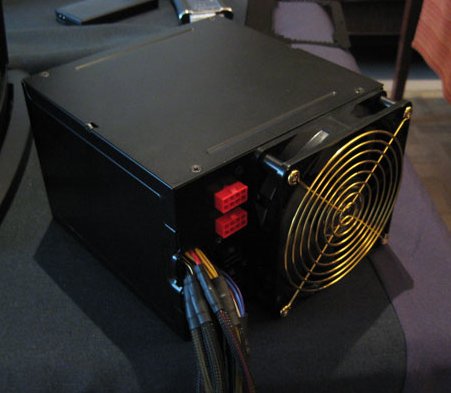