Nokia CEO Olli-Pekka Kallasvuo told Finnish national broadcaster YLE that his company may enter the laptop market, as the PCs and smartphones markets will come closer and closer together over the next couple of years.

"We are looking very actively also at this opportunity," Kallasvuo said, when asked whether Nokia plans to make laptops.

Industry has rumoured about Nokia's possible plan to enter the PC industry since late last year, but Kallasvuo's comment was the first official admittance of such plans.

The report from Reuters doesn't really go in the details, but fortunately there's some more information over at Unwired View. This report suggests these laptops from Nokia will actually be something that resembles Mobile Internet Devices (MIDs). One of the things Nokia is working on is a Linux-based device that uses the multi-core ARM Sparrow processors, you can expect this mobile system in 2011.

The design of Nokia Sparrow device does not follow the current netbook trend, going more the MID way, with some passing resemblance to Nokia N800 internet tablet.

It will have multi-slide keyboard, with different layouts/keys revealed as you slide it in different directions. The display also slides in several directions for different functions – think Nokia N97 tilting display. 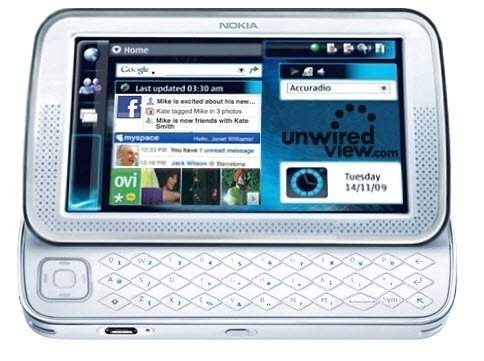