Last week Apple introduced the third-generation iPod shuffle, but inside this talking digital audio player lurks a shocking secret. iLounge found out the headphones of the new shuffle contain some kind of authentication chip.

Because Apple has moved the controls to the headphones set you can't just use any pair of headphones, and to make things worse third-party headphones makers will be required to purchase an Apple authentication chip - without it the headphones won't be compatible with the iPod shuffle.

There is, however, something that many users will care about: the new shuffle doesn’t fully work with any headphones except Apple’s. Because of what Apple has done here—something sneaky and arguably terrible for consumers, especially if it continues with other iPod and iPhone products in 2009—if you plug your old third-party headphones of any sort into the new shuffle, you’ll find that you can’t do anything with the device other than have it continuously play music, without volume controls or interruption, unless of course of you turn it off. Surprise: the only third-party headphones that will work are ones that haven’t even entered manufacturing yet, because they’ll need to contain yet another new Apple authentication chip, which will add to their price. Your only alternatives will be third-party remote control adapters—also not yet available, as Apple’s not even making one—and using Apple’s earphones. The prices for the third-party adapters will be no less than $19, and quite possibly more like $29; compatible headphones announced thus far start at $49.

Pictures of this chip can be seen at BoingBoing: 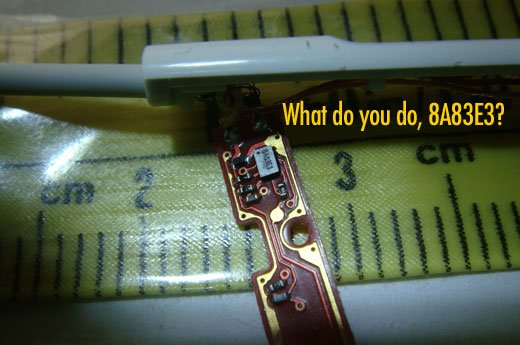