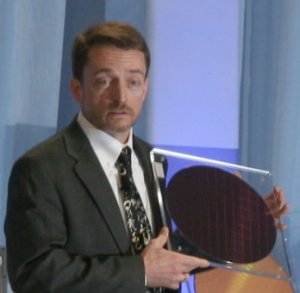 Theo Valich from Bright Side of News reports the Larrabee wafer that Pat Gelsinger showed off at the Intel Developer Forum in Beijing last week contains 64 Larrabee dies, each measuring around 600 square millimeters. Intel's parallel computing chip is massive, and the production costs of these chips must be pretty high.

Valich guesstimates Larrabee has between 1.65 billion and 1.75 billion transistors, if correct that's about 300 million more than NVIDIA's GT200 GPU. He believes such a part will cost at least $350-450.

According to our sources, first Larrabee chips will be built using 45nm High-K Hafnium-loving process with a move to 32nm a year after. Now, if Bloomfield die [Core i7] is 263mm2 in size and is consisted out of 731 million transistors, that means that Larrabee's 600mm2 die would end somewhere in the 1.65-1.75B transistor range.