Pricing wasn't mentioned in OCZ's press release, but a French site is already listing the drives and they are very expensive. Prices start at 1,400EUR for the 250GB version and the 1TB one will set you back 3,400EUR.

“It is our goal to deliver tailored SSD solutions for the complete spectrum of high performance applications,” said Eugene Chang, Vice President of Product Management at the OCZ Technology Group. “Designed for ultra high performance consumers, the Z-Drive takes the SATA bottleneck out of the equation by employing the ultra fast PCI-Express architecture with a RAID controller and four Vertex controllers configured in four-way RAID 0 within an all-in-one product, making this solution ideal for applications that put a premium on both storage performance and maximum capacity.”

OCZ continues to develop its enthusiast storage solutions that provide incredible speeds and higher storage capacities that rival conventional hard drives. The Z-Drive is based on cutting-edge PCI Express architecture that breaks through the performance barriers previously found with SATA interface. Offering a truly enthusiast grade storage upgrade from traditional hard disc drives, OCZ’s Z-Drive utilizes a combined 256MB of local cache and an onboard RAID controller, to provide a complete solution in a compact form factor. The OCZ Z-Drives offer space and cost-savings that uses significantly less power thanks to the benefits of high-quality flash-based storage in an integrated total-solution.

The OCZ Z-Drive is the result of the latest breakthroughs in technology building on the advantages of flash-based storage, delivering incredible performance that translates to professional-class data storage enthusiasts have come to expect from OCZ’s premium offerings. These next-generation drives feature exceptional speeds up to 510MB/s read and 480MB/s write, all while delivering lowered power consumption, ultra-fast data access, superior durability, and lower cost per ownership compared to conventional hard drives when factoring in the need for multiple drives and a separate RAID controller. In configurations of 250GB, 500GB, and massive 1TB capacities and priced aggressively to be within reach of high end consumers, the OCZ Z-Drive offers ample room to create a high performance storage array for enthusiast high performance systems. 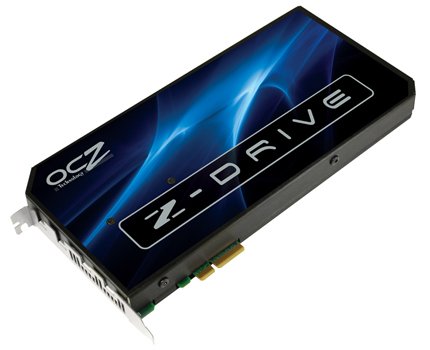